Please welcome today's guest, Sorchia DuBois. Sorchia is a fellow contributor to the Paranormal Romantics blog. Her Zoraida Grey trilogy is captivating. Now, she has a collection of fascinating facts and short stories in Zoraida's world. Here's Sorchia to tell us about her new release. 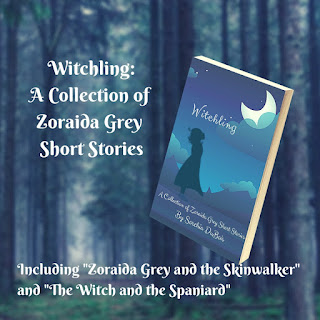 When I started writing about Zoraida Grey, I really intended to produce a bunch of quick little paranormal mysteries—the trials and tribulations of a fortune-teller in the Bible Belt. Fun Fact: I (and numerous other writers) use Tarot cards for inspiration.

So I started pulling cards to learn about Zoraida. My intent was to flesh out her backstory a bit—just a bit. Instead, I found castles and mystery and magic and witches galore. You’ll have to read the Zoraida Grey trilogy to find out exactly how far from the original idea I strayed.

But the original idea gelled into several short stories so I put them together into a little collection. Witchling: A Collection of Zoraida Grey Short Stories follows Zoraida on adventures that take place before she knows anything about fabulous Castle Logan in far northern Scotland—before she finds out Granny has been hiding secrets wrapped in secrets.

Witchling: A Collection makes a great introduction to Zoraida without spoiling the rest of the tale. And it gives some fun context to the big books for those who’ve already read them. 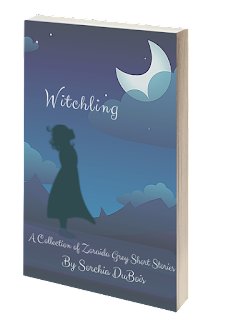 Welcome to the Magical World of Zoraida Grey! Before the events depicted in the Zoraida Grey Trilogy, Zoraida was a small town fortuneteller. Her magical journey begins with a murderous presence in her hometown. As a young woman, she finds ghosts in the strangest places. PLUS a tale about Castle Logan and how it got its dark reputation. If you've read the Zoraida Grey trilogy, you'll learn tidbits of backstory in this lively collection.

Stories in the collection:

from “The Witch and the Spaniard”

“Don’t be a fool. The Gathering in two weeks will begin our conquest of Scotland and England. Already dark rumors follow Father and Michael. None must suspect who we are––what we are––until it’s too late.” Ursula tied off a thread of burgundy, snipped the skein free with silver scissors.

The tapestry depicted a great battle of knights and fantastical creatures. Each thread shimmered with the blackest magic—death, fear, and despair. Each knot bound the spell more tightly. Burgundy blood punctuated the chaotic panorama. Ursula breathed life into the figures until they writhed and contorted in paroxysm of agony.

“Father can’t stop me.” Skulja stamped her foot on the hard stone floor. “Ignacio is a powerful wizard from Spain. Father can’t deny our marriage.”

“Father will do as he pleases and you will abide by his decision. You’re a foolish girl to let such an idea distract you. I’ll not intercede with him on your behalf.” Ursula moved her hand across the tapestry, concentrating on the enchantment. “Now leave us to our work, Skulja. You’re no use.”

Vera coiled a fresh skein of thread and tossed it into a wicker basket with several others. Leaving the wheel, she hoisted the basket into her arms and moved toward the door. “What colors do you need, Ursula? I’ve enough to finish the tapestry, I believe.”

“More burgundy and black, please. All that remains is to bind the protection to our faction and it will be ready,” Ursula whispered, her mind deep in sorcery.

With her back to Ursula, Vera cocked an eye at Skulja and mouthed the words, “Come with me.”
Skulja glared at her older sister, not quite ready to abandon her argument. “You’ll not govern me, Ursula. I’ll marry Ignacio and leave this cursed place behind.”

Ursula’s concentration remained on the tapestry. Either she was so deep into spellcasting she didn’t hear or so certain of her own position she didn’t care. Skulja followed Vera out and slammed the heavy oaken door behind her. The crash echoed in the empty passage but even that did not pull Ursula from the dark enchantment she wove. Alone in the tower room, she muttered ancient words, her mind and soul spiraling into the ether.

Sorchia DuBois lives in the piney woods and can often be found at Scottish celebrations watching kilted men toss unwieldy objects for no particular reason.  She writes tales of magic, mystery, passion, history, a little whisky, and a cat.