The latest Pets in Space (#4) dropped into my iPad yesterday. Hurray! I love this series. The stories are varied, as varied as the authors themselves. I can't wait to read this latest anthology.

Cassandra Chandler is back to tell us more about the stories included. 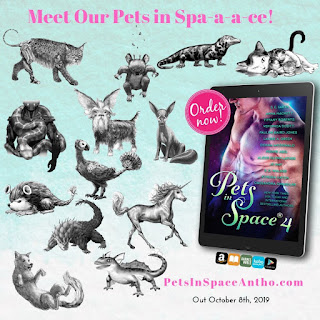 Who doesn't love a pet?! Now put that pet in space and watch the universe spin!

Pets in Space® is back for its fourth year and they’ve had a wide variety of pets sharing star billing with our heroes and heroines in the last four years. This year, their pets are even more diverse and feisty, even dangerous, than ever. Each of the 13 authors in Pets in Space® 4 have given me an exclusive peak of their pet in this year's Pets in Space® 4. Which is your favorite pet?

S.E. Smith - MADAS' FALLING STAR
L’eon is one of those characters that captures your heart. Hurtling into space after his home is destroyed, he mourns the lost of his species until he is found on the Tearnat home world by an unsuspecting Tearnat Princess. When he is found by Madas, he is immediately smitten with her gentle and kind heart. Madas is unaware that L’eon is a species that is feared by those that know about them. Lightning Chameleons may look cute and cuddly, but they are highly intelligent, virtually impossible to kill, and extremely lethal when threatened!

Anna Hackett - DARK GUARD
My cyborg cat started her life as a small hunting cat from the lawless desert world of Carthago. After an accident, she is rescued by the cyborg gladiators of the House of Rone, and given several cybernetic enhancements. Cat is very interested in the lives of the gladiator cyborgs of the House of Rone. She meddles, goes where she thinks she’s needed, and has a matchmaking streak she puts to good use. I definitely have a soft spot for this super-smart, independent, interfering feline.

Tiffany Roberts - ENTWINED FATES
Cypher is an inux, a creature that’s much closer to a living organism than a robot, and he has his own unique personality and intelligence that are belied by his animal appearance. Cypher is a loyal companion, but he also has a will of his own, and he isn’t afraid to risk himself to protect the people he’s bonded with.

Veronica Scott - STAR CRUISE: IDOL’S CURSE
I liked the idea of making Charrli a darling little dog who could be carried around in a purse but who actually has all this ferocious military style training and abilities. He’s not afraid of anything, not even alien idols!

Pauline Baird Jones - CYBORG'S REVENGE
This year, my pet is a snake, about the size of a boa conscritor. I know. I am not quite sure how this happened. I might be a little afraid of snakes. Snake’s name isn’t the only secret lurking under the reptile’s hide. She also has some surprising skills that help save the day. But the greatest thing that Snake and the other pets offer to their humans is their unconditional love, companionship, and loyalty. And I never thought I’d say that about a snake.

Laurie A. Green - SPYDOG
Maura may be the craftiest and most resourceful of all the StarDogs yet, because she's a very special brand of bio-engineered upgrade, created to work as a partner with deep cover Network agent, Rigel Blackline. Maura has a number of enhancements above and beyond “normal” StarDogs, creatures who often serve as ship's mascots and companion animals.

Donna McDonald - NOTHING REMOTELY FAMILIAR
After listening to an Australian friend talk about the mythical mutant koalas called Drop Bears, all my other ideas about pets fled because I couldn’t stop thinking about a cute koala bear with fangs. Adding an alien twist, I decided antenna were also going to be needed. Fangs are admittedly good in a fight, but I couldn’t send my cute creature to an alien ice planet without his own personal warning system.

Regine Abel - DOOM
Stran is a Creckel, a warrior beast that resembles a pangolin with a dragon head. Bigger than a Tibetan mastiff, he’s covered with thick, dark scales that protect him from almost any form of damage when he rolls up into a ball. As Doom’s lifelong friend and war companion, he has come to Earth to help free humanity from the Kryptid invaders who had also previously attacked his homeworld. Though he cannot speak, Stran is extremely smart and can communicate through telepathic imagery. The minute he sees Victoria, he recognizes her as his best friend’s soulmate and becomes extremely protective of her.

Alexis Glynn Latner - WINTER'S PRINCE
Characters in fiction come alive for the author. If they don’t, they may not come alive for the readers either.  Prince definitely came alive for me. He let me know that, like mythical unicorns, he has a special affinity for women who aren’t pair-bonded.  There’s a Medieval legend about how unicorns would come to a virgin and lay their head in her lap. In Winter’s Prince, he helps two women each find their true love—while our heroines and heroes battle a criminal smuggling ring that has invaded the Winterfair.  Prince is one of the heroes. And he knows it, too!

JC Hay - HEART OF THE SPIDER'S WEB
The behavior of my hero Rayan Barr’s goanna, Darcy, is patterned after a green iguana I kept for many years and was often described as acting like a big, scaly cat. Darcy is a big, insistent goof, and a bit of a food-hound, much to the delight of the ship’s crew.

E.D. Walker - THE PRINCESS AND HER BODYGUARD
Pym, the caliba, is a species of mystical birds who have an empathetic connection with their chosen person. In this case, Pym is linked to Liana, and he has mystical powers that he can use—but only to help her. The caliba are beautiful and deadly, and the villain of my story wants to exploit the wondrous birds for profit. Of course, my hero and heroine would never let that happen.

Kyndra Hatch - INTERRUPTING STARLIGHT
Squeak is a molk, a burrowing animal that resides in Korthan space with the look and size of a large hedgehog of Earth. Trumpet ears allow him to hear very well, especially when hunting. Playful and social, molks make great pets. They are scavengers, but also fierce hunters with the bonus that anything they scavenge or catch can also be eaten by humans

Cassandra Chandler - IMPORT QUARANTINE
I adore cats, and calicos are among my favorites. When it came time to pair a certain Sadirian soldier with an Earth pet, the first thing that came to mind was a super-sweet calico with a few big patches of orange and black on her white fur. Meredith is from the clowder of semi-feral cats that we met earlier in the series. She wins everyone’s hearts before long, unless they’re trying to hurt her friends and family! And this little Earth-cat is harboring a big surprise... 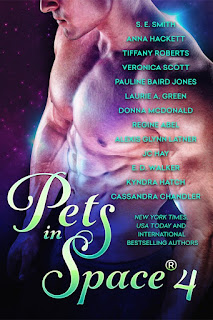 Grab your copy of Pets in Space® 4 today! https://www.petsinspaceantho.com For a limited time, Pets in Space® 4 brings together today’s leading Science Fiction Romance authors to help Hero-Dogs.org, a non-profit charity that helps our service veterans and first responders.

Thirteen incredible stories by thirteen of today’s bestselling authors. Don’t miss out on this limited time offer for Pets in Space® 4 and help a great charity! https://www.petsinspaceantho.com

Proud supporters of Hero-Dogs.org, Pets in Space® authors have donated over $7,100 in the past three years to help place specially trained dogs with veterans and first responders. 10% of all pre-orders and the first month’s royalties of Pets in Space® 4 will again go to Hero-Dogs.org. Open your hearts and grab your limited release copy of Pets in Space® 4 today so together we can continue to assist this worthy charity! https://www.petsinspaceantho.com