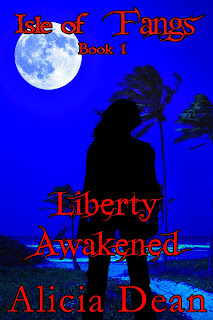 Evil lurks beneath the surface in the beauty of the tropics…

After graduation from her small, Oklahoma high school, Liberty Delacort is looking forward to a fun-filled summer before college. But when the people she trusts the most betray her, and a letter arrives claiming her deceased father is still alive, she jumps at the chance to travel to an exotic island to meet him.

But her excitement is short-lived. Her father is dying, and he doesn’t want her around. And, in spite of its outward tranquility, the island is filled with danger and ominous secrets. The secrets soon begin to unravel, and she discovers she is a descendant of Van Helsing, the vampire hunter.

The one up side is her budding romance with the sweet and sexy Ryan Kelly. But even that is threatened when—in spite of her fear of him—she finds herself attracted to an insolent, formidable vampire. Her plan to stay away from him fails when she learns he is the only one with the ability to train her to fulfill her destiny—to save humans from a faction of vicious vampires.

Will her inexperience lead to her death—and the death of others—or will she rise to the challenge and realize her full potential as a Hunter?

At the Van Helsing house, Eli climbed out and opened the passenger door. Sliding one arm beneath Liberty’s knees and one behind her back, he gently lifted her from the car. Her head lolled against his shoulder. His chest tightened at the soft feel of her against him. He tilted his head, the urge to rub his cheek along the silky hair more powerful than any craving for blood he’d ever had. He gritted his teeth and forced the thought away. Get a grip, man. She’s not for you. Not in a million years.  Favreau opened the door as soon as Eli stepped onto the porch. He moved back and gestured for Eli to enter, then followed him up the stairs.

Antoine turned the knob to her bedroom, and Eli went inside and lowered her onto the mattress. She didn’t move. Her thick lashes cast a shadow against her pale cheeks. Her breasts rose and fell with her steady breathing. That same tightening came back to his chest, moving up to his throat.

Eli curled his lip. “She’s getting better,” he whispered. “But she’s not a warrior.”

“She must learn to be.” Antoine put a hand on Eli’s arm, and he turned to face the older man. “She cannot be your Grande Amour.”

“I know that,” he snapped, still whispering.

“A woman, especially a young woman her age, can have many loves. Does she know why she can never be yours?”

A whoosh of air escaped Eli’s lungs. He didn’t want to discuss this with Antoine—or anyone else for that matter. He knew Liberty had to mate with a human. She had to continue the Van Helsing line…have babies with another man. He couldn’t give her that. Not ever. He damn sure didn’t need Antoine reminding him.

He shook his head, then spun and stalked from the room. 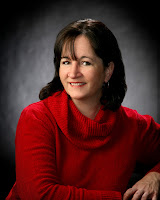 Alicia Dean:
I live in Edmond, Oklahoma. I have three grown children and a huge network of supportive friends and family. I have dreamed of being an author since I was a young child. There is no feeling in the world like seeing your dreams fulfilled, and I couldn't be happier. I wrote my first romance at age 11, and my hero looked just like Elvis Presley (which I plainly stated in the story as my description :)). I still have that story, but I hope I have learned and grown as a writer over the years.

I write suspense and paranormal, among a few other random genres from time to time. Other than reading and writing, my passions are MLB, NFL, and watching my favorite televisions shows like Vampire Diaries, True Blood, Justified, and Dexter. My favorite authors, and this is only a small sampling, are Michael Connelly, Dennis Lehane, Lee Child, Lisa Gardner, Sharon Sala, Jordan Dane, Ridley Pearson, Jonathan Kellerman... I could go on and on. Oh yeah, and I am still an avid Elvis Presley fan.