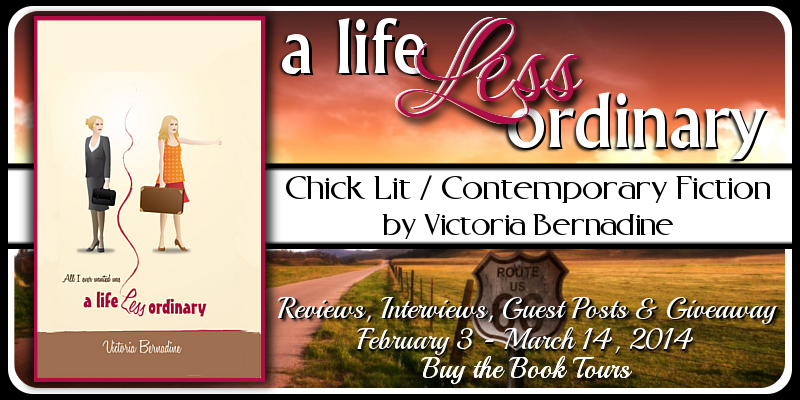 Victoria Bernadine is on a tour celebrating the release of her debut book. She's graciously accepted my invitation to interview her. Victoria has a giftaway. More about that at the end of the post.

Welcome, Victoria. Tell us about yourself.

I’m a forty-something woman, living and working in Edmonton with my two cats, The Grunt and The Runt.  I recently returned to work after taking a thirteen-month sabbatical from the office rat race.  It was a great break, and I highly recommend it to everyone!

I’m not disciplined enough to have a work schedule.  A Life Less Ordinary was mostly written and edited at the back of the bus during my daily commute.  Forty-five minutes each way, so I had time to kill – LOL.  When I’m really caught in the throes of writing and editing, though, I write every minute I can.  That includes in front of the TV, in bed, on the couch, on a plane (part of A Life Less Ordinary was written on a plane on the way to the Dominican Republic)…anywhere.  Of course, it helps that I also write with paper/pen, so it’s easy to carry around and use it whenever or wherever the mood strikes me.

That all said, I do try to write something each day, even if it’s only a sentence or two.  This year has been a bit spotty due to off line events, but I hope things are going to start to smooth out now.

A Life Less Ordinary was inspired by where I was in my own life at that particular moment when I started to write it.  Other books/stories have been inspired by actors, or by something on TV, or just a passing thought that flits through my head, or by somebody else’s stories about their life.

Hmmm…this is a toughie.  While A Life Less Ordinary is the first book I’ve published, it’s not the first thing I’ve written and shared with others, and not the first that would be considered novel-length.  I’ve been writing steadily since 2008 (fanfic, and in 2009, I started writing original fic).  If I were to limit it to my original fic, then I’ve written a novel, a novella, and a script before A Life Less Ordinary was finished.  That’s not counting the unfinished stuff.

My favourite?  Well, A Life Less Ordinary at the moment (since it’s on tour – LOL), but I have a lot of affection for everything I’ve finished, and everything I’ve started.

Compelling characters and strong concepts.  I don’t need a lot of intricate plotting and intrigue (although I enjoy those as well, of course), but I definitely need to care about the characters I’m reading about, or one of them, at least.  As I always say about books/movies/TV shows where I dislike every character:  “I wouldn’t spend time with these people in real life, why should I waste my time watching/reading about them?”  I’m also willing to forgive a lot if the idea underlying the story is interesting.

That rush of creation.  No matter how bad that first draft is (and OMG is it bad sometimes!), it’s still something I’m creating from nothing.

I start with whatever scene or snippet of dialogue has popped into my head.  I may or may not start with a basic plot (“A 45-year-old woman has a mid-life crisis, and heads out on a six-month road trip.”), but sometimes I’ve started with a snippet of dialogue or a scene, and then figured out what’s going on.

With A Life Less Ordinary, it just so happened the first scene I wrote was also the first scene in the book.  That’s seldom the case – LOL.  I don’t write sequentially; I write whatever scene I’m envisioning, and then move on from there.  Most of the time I have no idea where/when the scene takes place in terms of the plot and timeline, only that the characters are going to get to that point.  Eventually.

Character.  Well, I mean, the initial ideas are plots, but once I start writing and get to know my characters, they control it all.  I have a book where the story was completely hijacked by a character who was supposed to be secondary and rarely seen (although powerful when she was seen).  I adored her so much, I couldn’t stop writing about her, and the next thing I knew, the book was about her.

What two authors we would find you reading when taking a break from your own writing?

Well, pretty much anybody, since I read every genre and have favourites in all of them.  However, the two I love best (at the moment) are Terry Pratchett, particularly his Discworld novels, and Christopher Brookmyre, who’s work is dark and violent and amazingly funny.

I have a blog at victoriabernadine.wordpress.com, which is mostly devoted to my book tours at the moment – LOL – but I also post about what I’m working on and some updates as to what’s happening in my life.

I also have a twitter account @vicbernadine, although I seldom tweet anything.  I love to talk, but I can’t seem to think of anything to tweet that might be of interest to anyone.  (I wonder if I should be worried about what I talk about in real life??)

Now, let's learn something about your debut book.

Blurb for A Life Less Ordinary

For the last fifteen years, Rose “Manny” Mankowski has been a very good girl. She turned her back on her youthful fancies and focused on her career. But now, at the age of 45, she’s questioning her choices and feeling more and more disconnected from her own life. When she’s passed over for promotion and her much younger new boss implies Manny’s life will never change, something snaps. In the blink of an eye, she’s quit her job, sold her house and cashed in her pension, and she’s leaving town on a six month road trip.

After placing a personal ad for a travelling companion, she’s joined in her mid-life crisis by Zeke Powell, the cynical, satirical, most-read – and most controversial – blogger for the e-magazine, What Women Want. Zeke’s true goal is to expose Manny’s journey as a pitiful and desperate attempt to reclaim her lost youth – and increase his readership at the same time. Leaving it all behind for six months is just an added bonus.

Now, armed with a bagful of destinations, a fistful of maps, and an out-spoken imaginary friend named Harvey, Manny’s on a quest to rediscover herself – and taking Zeke along for the ride.


Manny walked in her door, looking tired and feeling worn out. She wondered ruefully why the only thing not on a schedule was the time she could leave the office. She dropped her purse on the table and hung up her coat and keys. With a tired sigh, she walked into the living room and plopped into the armchair. She closed her eyes as Harvey walked out of the kitchen with a glass of white wine and began to rub her shoulders. He again looked impossibly handsome, this time wearing a sweater and jeans. She sighed in imagined bliss, and looked at him with sad eyes.

You have no idea how much I wish you were real.

In a blink, he was gone–and the phone was ringing. For a split second, Manny considered not answering it.

There’s your chance to talk to a real person, Harvey murmured.

Probably Rebecca. Or Daisy. They’ll worry if you don’t answer.

All right, all right.

Manny heaved herself to her feet and walked to the phone.

She caught a glimpse of his grin as she answered the phone.

It was Rebecca, asking her to go out the next night.

“Oh, come on–you’ll have fun! And seriously–you haven’t gone out with us in months!”

“You’ve been tired your whole life I think. You need to break out of this rut you’re in! Come out for a few drinks and dancing with me and Daisy. Who knows, maybe you’ll meet a good-looking guy and be swept off your feet into a red-hot love affair.”

“I’d love to go dancing,” Manny said to Rebecca, “but the guy is just a figment of your imagination.”

“Only because you don’t put any effort into it. Seriously, it’s not healthy to do nothing but work and go home. That’s how people go crazy you know.”

“Huh. You mean next thing you know I’ll be talking to my imaginary friend?”

Harvey grinned wickedly and Manny abruptly turned her back to him.

“Yep–and sound like you’re actually looking forward to it, okay?”