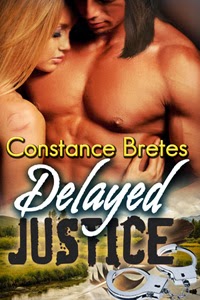 Blurb:
Can two former lovers set aside their differences and work together to bring a criminal to justice?

Five years ago, Sami Parker's life was changed forever when she was injured in a bombing incident which left another young woman dead—a woman who happened to be the fiancée of Sheriff Makeeta Robertson, Sami's former lover. Initially, Sami was a suspect in the crime, but the sheriff was forced to release her due to a lack of evidence. The town, convinced that she got away with murder, turned against her.

At last an arrest has been made and the sheriff needs Sami's help to get a conviction, but can she trust him? Although wary and cautious, she wants to see this man brought to justice and wants to clear her own name once and for all. But the awakening feelings she has for Makeeta bring yet another problem. Then there's the secret she's kept for the last five years—one she may not be able to keep any longer, and one that may change the outcome of the trial.

Sami got in her truck at about ten in the evening to head to Milne City to get her mail. She pulled up in front of the post office, parking parallel to the building, and walked inside to her mailbox. When she returned to her truck, a sheriff cruiser pulled up beside her. She walked between the cruiser and her truck and Makeeta got out of the cruiser.

"Sami, what are you doing out here this late at night?" he asked.

"What does it look like I'm doing?" she uttered sarcastically.

"Why do you get your mail so late?"

"To avoid people like you," she retorted curtly and continued to her truck and opened the door. She fumbled with her mail and some dropped to the ground. Makeeta bent over to pick it up at the same time she did. He grabbed the mail first and handed it to her.

"I was going to call you next week. I need you to come down to the sheriff's office and see if you can pick out the perpetrator in a lineup," Makeeta said. She climbed into her truck and he leaned slightly on her truck door, preventing her from closing it.

"I already picked him out at the district attorney's office. You know that—you were there."

"Yes, but for added security, if you can identify him in a lineup, that would leave the jury with absolutely no doubt about the identity. We want to seal the case up and close any gaps or loopholes that the defense might grab on to."

Sami let out a sigh. "I don't know if I'm comfortable coming down to the sheriff's office to do this. How do I know you won't arrest me?"

Makeeta looked at her questioningly. "Why would I do that?"

"Gee, I don't know, maybe because you think I helped create the damn bomb that went off?"

"I thought we were past this, Sami. I cleared you of any suspicion of involvement in the case."

"Yeah, well, what I don't understand is why if you didn't believe me five years ago, you would believe me now," Sami said, holding her raw emotion in check.

"I don't recall ever saying I didn't believe you, but I had an investigation going on and I needed to rule everyone out." Makeeta's voice hardened.

"You didn't rule me out…you brought me into the station the minute I was released from the hospital. I had intense pain, needed my medication, and you kept me there for hours. Did you conveniently forget about that?" Sami asked, looking him up and down from her side vision. He still had a beautifully proportioned body. He wore a blue jean shirt, with his badge pinned to his pocket, and tight-fitting jeans. His face was ruggedly handsome, with shoulder-length black hair. "You should have sent one of your deputies out to talk to me two weeks ago, you should have known that I wouldn't be interested in talking to you about anything." She wanted to get this conversation over with so she could leave.

"I thought it would be easier for you if it was just you and me," he said quietly.

"After what you put me through, you thought it would be easier for me? What planet did you come from?" she asked incredulously. "Besides, you weren't alone, you brought the district attorney and another deputy with you."

"Okay, maybe I made a bad judgment call there," he confessed. "But I'm here now to ask you to come to the station and see if you can identify the perpetrator."

"When do you want me to come down?"

"As soon as you can," he answered crisply.

"All right, may as well get it over with. I'll be there tomorrow at ten, is that okay with you?" she asked sharply.

"Tomorrow at ten would be just fine." Makeeta smiled thinly at her.

Connie’s Bio:  I was born and raised in Michigan. I graduated from Pontiac Catholic HS in 1974 and went to work shortly thereafter for the State of Michigan. I have been employed by the State of Michigan for over 35 years. I have a BA in Business Administration and an MBA in Leadership Studies from Baker College.  I have written so many papers for college, ‘how to’ procedural manuals, and casework manuals, I decided I wanted to do something fun and enjoyable, so I started to write romance stories about seven years ago and haven’t regretted it.

I met my happy ever after partner in 1994 when I answered his ad in a Christian singles magazine and we've been together ever since. In January, 1995, I asked him to marry me and we were married in April of 1995. We have no children, but we do have a houseful of cats, indoor and outdoor kind.

In my spare time, I like to read, and watch education shows such as Discovery, Discovery Science, Investigative Discovery, National Geographic, HLN, and the History Channel.  I have a pad of paper next to the remote control in the living room to take notes that I find beneficial when I’m writing a suspense romance. I also like to travel out west.  Hubby and I have property out in Montana where we hope to build a log home on in the near future! You will find some of my romance locations are in Big Sky Montana. In fact, my new release, Delayed Justice, is situated in Montana.

I can be reached at http://www.conniebretes.weebly.com, cbretes@sbcglobal.net, facebook under the name of constance bretes, and twitter under the name of connie bretes. I know, I think I was having an identity crisis when I signed myself up for all this.
Posted by Diane Burton at 1:00:00 AM