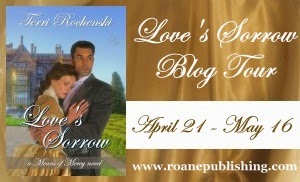 Blurb:
Hired as a nanny for her cousin’s children, Anne Tearle finds security and a loving family. The children are a dream, but London society is a world of its own, one where a displaced farm girl has no business being. But, wealthy rake, Gavin MacKay, helps her to see associating with the upper class might not be as horrid as she first assumed.

Like all things worthwhile, love comes at a price, and the cost soon bestows more anguish than joy. Lost, but not undone, Anne must find the courage to begin life anew, or succumb to sorrow's unrelenting waves of grief.

Moment of greatest fear?
Leaving Uncle’s farm for the big city of London with nothing more than a mere tied-up bundle of belongings, a new life with family I had never met awaiting me. The anxiety of arriving at King’s Cross Station without knowing what my cousin looked like caused me to chew my nails to nubs.

Moment of greatest joy?
Finding out the real reason my dear cousin really sent for me. I never expected—or dreamed—such a thing would ever happen to a poor, orphaned farm girl.

Do you give trust once it’s broken?
I believe every person deserves a second chance if they’ve failed, but having been raised by an abusive aunt, I refuse to be taken advantage of in certain ways.

What are you passionate about?
I long to please those I love—those I care about. Also, as a woman in the 19th century, it is my place to make all appear well in the home, even if it’s not, and I strive to do so.

What about Gavin MacKay do you find most attractive?
I can’t say there is any one thing. He is tall, handsome, and has the most beautiful eyes I’ve ever seen. Dark as the midnight sky they hold fire. Passion. And on occasion, a boyish glee that I can’t help but adore.

How do you deal with disappointments in life?
My whole childhood was a disappointment, but I’ve learned to keep my outlook and demeanor positive—even if I’m full of sorrow inside.

Safety or adventure?
I like to make safe choices, but on occasion an opportunity to live unconventionally will present itself and I can’t help but agree whole heartedly.

Propriety or honesty?
I prefer honesty which is why I adore my friend, Marianne, but we do live in a society that demands we behave properly or suffer its scorn.

Needlework or mucking out stalls?
Some afternoons prove so dull I would gladly trade my needle and threads for a pitch fork!

Terri Rochenski started writing stories in the 8th grade, when a little gnome whispered in her brain. Gundi’s Great Adventure never hit the best seller list, but it started a long love affair with storytelling.
Today she enjoys an escape to Middle Earth during the rare ‘me’ moments her three young children allow. When not playing toys, picking them back up, or kissing boo-boos, she can be found sprawled on the couch with a book or pencil in hand, and toothpicks propping her eyelids open.