She is desperately seeking freedom...
On the eve before her twenty-first birthday, Skylar steals a ship and escapes from the planet Rebed. She refuses to be another wife for the slimy space pirate that is her betrothed. After hearing of her brothers’ success, she applies to the 1Night Stand service on her way to Earth, hoping Madame Eve can find her a hero, to make her feel special, even if for only one night.
He is trying to fit in...
A longtime friend to Skylar’s brothers, he’s always relegated her to the look and don’t touch category. Though, Daran traveled to Earth years ago, he still struggles to fit in on the planet. When his boss suggests a blind date, he reluctantly agrees. What would happen if anyone found out about his alien ancestry?
And they are not at all meant to be together...
Has Madame Eve made a huge mistake, or will Daran tread into forbidden territory to be with the one woman he’s always wanted, and become the hero Skylar craves?
Available from
Decadent Publishing | Amazon US / UK / Canada | All Romance | more

Short blurb:
Skylar is desperately seeking freedom. Daran is trying to fit in. And they are not at all meant to be together. Has Madame Eve made a huge mistake, or will Daran tread into forbidden territory to be with the one woman he’s always wanted, and become the hero Skylar craves?
Excerpt:
His evening was supposed to be fun and exciting. Not filled with the worry of his companion learning of his extraterrestrial origins, or of her outing him to the world. He’d kept his hair short, to hide the feathers that grew in when his locks reached a certain length. And, each morning, he covered his exposed skin with waterproof foundation to conceal the blue tinge of his skin. But, as soon as he removed his clothing later in the night, his façade would end. He wouldn’t be able to hide his differences. Unless we stay in this part of the hotel all night. The dim lighting would make his skin color less obvious.
Perfect! He stood, his muscles finally relaxing, the tension melting away. Circling the room, he blew out every third candle. Just to be sure. In the morning, his one-night lover would leave, never knowing she’d had sex with an alien.
Daran returned to his chair, leaning back, hands behind his head. Or, if he was really lucky, he’d find an Earth woman who considered extraterrestrials to be sexy.
The door to the observatory rattled and he jumped to his feet, brushing sweaty palms across his pants. Heart pounding, he glanced up at the sky. Gods, please let this evening work out.
With a burst of light, the door opened. A woman stepped through, her long, lean body hidden in shadows. Clutching his fingers behind his back, he waited for her to move closer, needing to see her better.
A strange tingling filled him. Not good. Something’s wrong. He swallowed the sudden lump in his throat. I should never have agreed to this. Trying to step back, he stumbled when the message didn’t reach his feet.
His date drew nearer, her appearance becoming more defined. A silver dress hugged her body, both protecting and giving a hint of the delicious treat inside. The candlelight reflected off her wide eyes, leaving them glowing like sapphires. With most of her hair pulled back, the remaining long blue tendrils framed her face and highlighted her matching lips. But her radiant, mesmerizing eyes sparked his recognition. He knew her. His stomach sank along with all hopes for the evening.
Of all the women on Earth—hell, in the universe—for him to be set up with, Madame Eve had to pick the one lover he could never have. 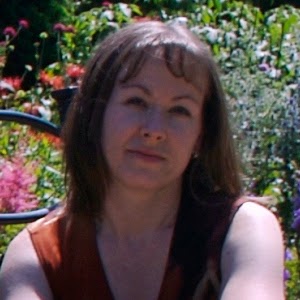 Jessica E. Subject is the author of contemporary and science fiction romance, ranging from sweet to erotica. In her stories, you could meet clones, or a sexy alien or two. You may even be transported to another planet for a romantic rendezvous. And if you’re looking for something really steamy, check out her erotica stories written as Paisley Brown.
When Jessica isn't reading, writing, or doing dreaded housework, she likes to get out and walk. Fast. But she just may slow down if there is a waterfall nearby.
Jessica lives in Ontario, Canada with her husband and two energetic children. And she loves to hear from her readers. You can find her at jessicasubject.com and on twitter @jsubject.
Website/Blog | Newsletter | Twitter | Facebook | Pinterest | Goodreads | Amazon | Authorgraph

Or link to the giveaway here:
http://www.rafflecopter.com/rafl/display/a63a7d40/ 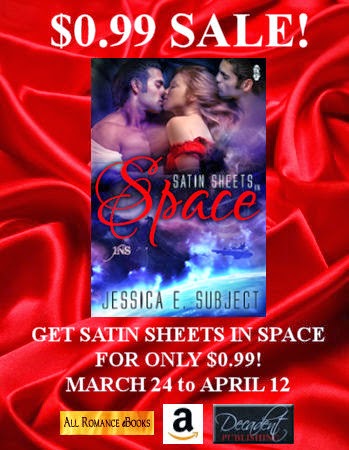 To celebrate the release of His Alien Virgin, Satin Sheets in Space has been marked down to $0.99 from March 24 to April 12.
Grab a copy for yourself or a friend from:
Amazon: http://www.amazon.com/Satin-Sheets-Space-Series-ebook/dp/B0086OO3GE/
All Romance (multiple formats): http://www.allromanceebooks.com/product-satinsheetsinspace-804342-143.html
Decadent Publishing (multiple formats): http://www.decadentpublishing.com/product_info.php?products_id=552