A day when we honor those who died while serving in our country’s armed forces. The practice of decorating soldiers’ graves started after the Civil War—the war in which more Americans died than in any other war. 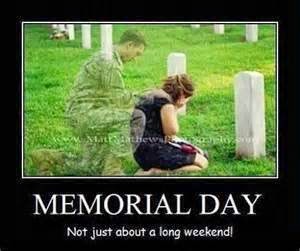 This picture, posted on Facebook, really touched me. It’s s vivid reminder of the families who have suffered a loss that only those who have suffered a similar loss can fully understand. I haven’t, but my heart hurts for those who have. Spouses, parents, children of our fallen heroes gave a sacrifice as great as the soldier who died. Maybe greater. They live with the heartache every day while the soldier has gone to his/her reward.

While the rest of us enjoy our three-day weekend, have our picnics, kick off the beginning of summer, maybe we can take a moment and thank those who died protecting our freedoms.
Posted by Diane Burton at 8:05:00 AM