New Release: IN TOO DEEP by Mara Jacobs 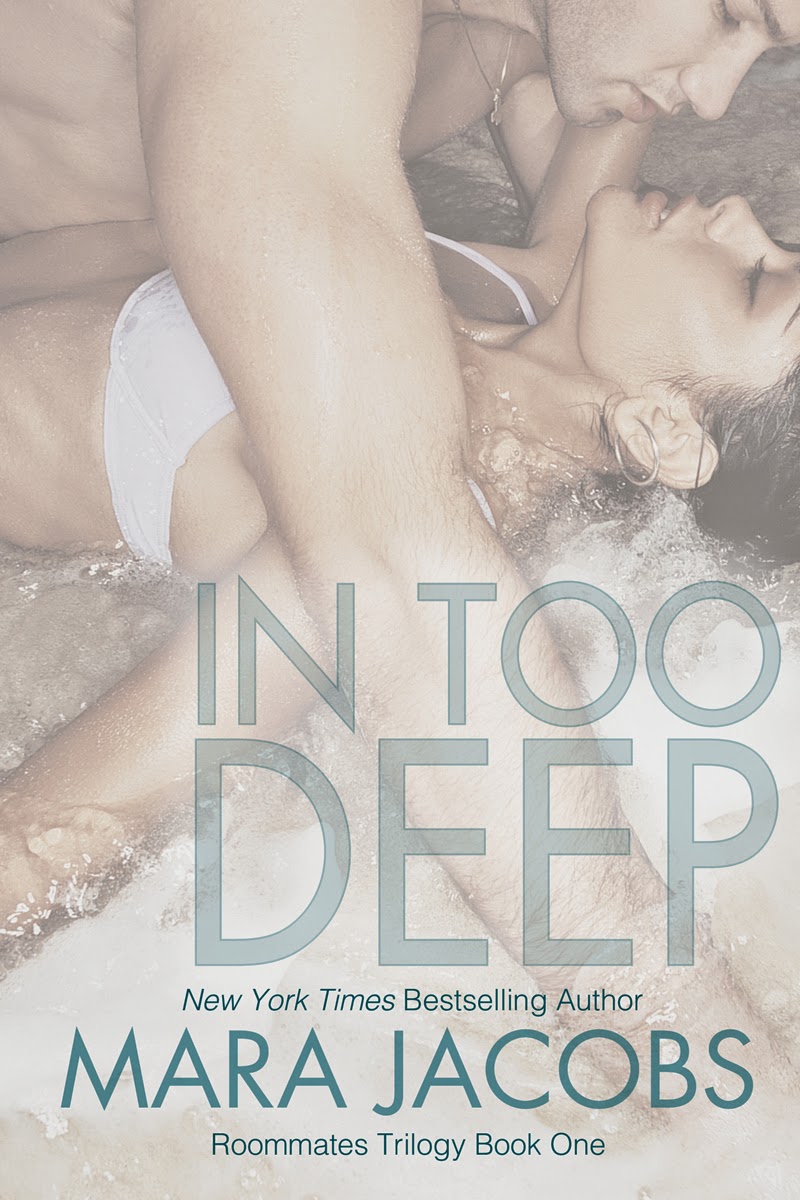 Blurb:
I didn’t believe in love at first sight, until I first saw Lucas Kade.

I was giving swimming lessons to children when I saw him. Turns out one of the kids was Lucas’s little brother. So, I’d be seeing a lot more of Lucas. And that was just fine with me.

I had a lot going on—a freshman at an elite college, first time away from home, and, oh yeah, roommates with a girl I’d been sent to spy on. I wasn’t exactly looking for anything exclusive. Something casual, though, would be great.

But there was nothing casual about my feelings for Lucas.

He was a townie, hiding a secret, and I knew better than to get involved. I was always the sensible one, the peacekeeper.

Before I knew it…I was In Too Deep.

I swam laps for an hour. It was longer than what I normally did, and I pushed myself harder. I thought about the studying I should be doing. I thought about my roommates and how we were—finally—starting to gel.
But my mind kept coming back to Lucas. I knew Andy’s last name was Bell from my roster. But that didn’t necessarily mean Lucas had the same last name. In fact, that would be pretty rare with the kids in this program.
Bribury was an elite, Ivy League wannabe school filled with the kids of movers and shakers who didn’t have quite enough moves and shakes to get their kids into Harvard or Yale. It was in a smallish town halfway between Baltimore and DC.
It was idyllic and ivy-covered (see? they’ve got nothing on us; our ivy grows just as thick) and small and exclusive. There was nothing but BMWs, Mercedes, and other sports cars in the student parking lot.
But the town that surrounded Bribury was—in my father’s words—a complete shithole.
Crime, poverty, drugs…the Triple Crown of shitholes.
On campus, we didn’t see it. And if our power-hungry parents had taught us anything, it was to not see what we didn’t want to.
Unless it looked good to do so.
After swimming laps, I walked through the deserted locker room to the far corner and the old-fashioned steam room. I grabbed three of the clean towels from the bench in front, and made my way into the room I’d turned on before lessons.
I loved this steam room. It was like something out of a movie, where, like, the Ukrainian mafia discussed who was going to be “offed” or something.
I peeled out of my suit, wrung it out, and laid it on the lower tile bench. I wrapped one of the towels around me and spread another one out on the top tile bench, then sat on it. Completing the old Ukrainian man vision in my mind, I draped the third towel over my head, with a good third of it dangling in front, almost like a shroud.
Instead of thinking about who needed whacking, I thought again of Lucas. Of how his tall, muscular body moved as he’d walked down the hall toward me. Of how his hair had been so black and smooth once he’d gotten close. Of how I wished he’d gotten even closer.
I wasn’t a total whore, and had only been with one boyfriend in high school, but the sight of Lucas’s broad shoulders in the black polo, and his tight—I mean tight—ass in those jeans… Well, that sight would get even the goodiest goodie-goodie wondering if she could get away with a quick, self-administered relief session right here, in a university steam room.
I didn’t, of course, but God, how my body wanted me to. Exhausted from the laps, further wrung out from the heat and steam, my limbs felt languid and liquid. Like my arms and legs might just blend into the scuzzy old tile that lined the inside of the room.
I lifted my arms to the towel on my head, gently squeezing across my breasts as I did. My legs shifted. I needed to get out of here, take a cold shower. The place was always empty this late into the evening, but still, it wouldn’t do for Lily Spaulding, daughter of Grayson Spaulding, political consultant extraordinaire, to be caught diddling herself in a steam room.
Hmmm…but maybe in the shower?
I rose from the bench, the hard tile having made little dents in my ass and thighs, even through the towel.
I wrapped the towel from my head—not as sweat-and steam-drenched as the towel I’d worn—around my body. I took the other two, and my swimsuit, and left the room, careful to turn the room off at the control panel. Nobody seemed to mind—or notice?—that I was here this late, but leaving a steam room on all night would probably curb that.
I walked out of the room, turned toward my locker, and froze.
Lucas was staring straight at me. He seemed as startled as I was, but recovered faster. A slow—God, so sexy—smile spread across his face.
“I’m here to collect the towels,” he said. Then the smile turned just a little deadly and I wondered if I was about to get whacked by some fictional Ukrainian mafia boss. He nodded at my body, at my hand that clung to my barely closed towel.
“Hand it over.”

Bio:
Mara Jacobs is the New York Times and USA Today bestselling author of the Worth series.

After graduating from Michigan State University with a degree in advertising, Mara spent several years working at daily newspapers in advertising sales and production. This certainly prepared her for the world of deadlines!
She writes mysteries with romance, thrillers with romance, and romances with…well, you get it.
Forever a Yooper (someone who hails from Michigan's glorious Upper Peninsula), Mara now splits her time between the Copper Country, Las Vegas, and East Lansing, where she is better able to root on her beloved Spartans.

You can find out more about Mara’s books at
www.marajacobs.com
In Too Deep  Buy Links