I'm so please to welcome Abigail Owens to the blog. I met Abigail through the Paranormal Romantics blog. She's an entertaining and faithful blogger. 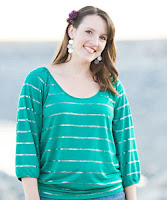 Welcome, Abigail. Tell us about yourself.

Oh gosh, let’s see… I am an author—paranormal and contemporary romance are my genres. I publish paranormal under the pen name Abigail Owen. Contemporary is about to start publishing more under a new pen name which I have yet to choose. Lol. Other titles include Star Wars geek, chocoholic, spreadsheet lover, organize house obsessor, wife, mom, total nerd. J

Where can readers find you? (social media, etc.)

Each book is different. For example, I find last books in a series take me much longer than most books. Months of agonizing. But, in general, I finish the first draft in 3-6 weeks and do additional drafts and editing in 3-6 weeks. At the moment I’m attempting to finish a book—including all the drafting and perfecting, in 4 weeks. That’ll be a stretch, but I’m determined. J

I think they think I’m nuts. Lol. But they’d never tell  me so. I get amazing support from my family—especially my husband who might not get the obsession or read my genre, but let’s me chase my dream and listens when I tell him all the nutty details of the process. I think my daughter wants to be a writer. She’s constantly coming up with stories and writing them down. J And my mom edits all my self-published stuff and reads every book even if she doesn’t edit it. I love my family!

I am 90% pantser / 10% plotter. It’s an evolving process for me. My first completed book, Blue Violet, was 100% pantser. In fact, I didn’t even write the scenes in order, but skipped around. I do a lot more preparing ahead of time these days, though less to do with plot and more with understanding my character’s development and what my start and end points need to be. Maybe a few points in the middle so I know where I’m aiming. After some amount of preparation, I write the first draft, and my characters take that opportunity to tell me how to get from A to B (and sometimes B becomes C).

Ahh! Everything. J Not really, but it feels like it. I learned how to finish a book (after 20+ tries). Then I learned about editing. I found a fantastic content editor who taught me things like pacing, no talking heads, avoiding clichés, and a ton of other tips and tricks which I’ve learned to incorporate into my writing as much as possible. I laugh when I read the first draft of Blue Violet What a difference!

Fun question! My life as a data analyst is coming out in my current WIP. I’d love to incorporate my stint working for a dry cleaners, or maybe my time as a Sonic car hop in a book. I have some good stories from those. I still have waitress dreams, so maybe that’ll end up in one someday.

If I were a first time reader of your books, which one would you recommend I start with and why?

I’d recommend starting with Andromeda’s Fall or, if you want something sweeter, Blue Violet. They are book award-winning books and each kicks off a series. Although, my personal favorite is Tieryn’s Fury. But that one is 3rd in the series, so don’t start with it. Lol.

Yikes! I can’t limit it to 2. Lately I’ve been pouring through books by T.S. Joyce (paranormal) and by Noelle Adams (contemporary). I also recently discovered Samanthe Beck (contemporary) and love her characters! And I’ll always read anything by Rebecca Zanetti (paranormal), Lucy Monroe (contemporary), and Suzanne Wright (paranormal).

A witch hunter, a witch hiding in plain sight under his nose, triplet preteen witches who need a mother, and a ton of secrets. What could go wrong?

Bait N’ Witch is my third book in the Legendary Consultants series. While the series is probably best read in order, each book can stand alone. So no need to start at the beginning if you don’t want. J Each book in the series features a different paranormal creature and a different love story. Book 1 was demigods and an office romance. Book 2 was werewolves and a marriage of convenience. There are two short stories, as well—one with ghosts and one with psychics. And now Bait N’ Witch with is, of course, witches with a nanny love story. I had a LOT of fun writing this one. Rowan, my heroine, appeared in Her Demigod Complex, and I couldn’t wait to finally get to her story! 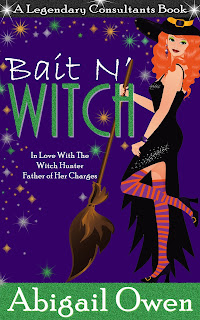 Rowan McAuliffe has been hiding most of her life. Secretly trained in her powers by an unusual source, she’d been taught not to trust anyone. Especially other witches. However, after she was forced to perform a hateful act against her will, she now hides from the Mage High Council who seek answers, and possibly her life.

Greyson Masters is the Council’s best enforcer–a witch hunter who lays down the law. Despite the danger of his job, Greyson is also raising his triplet daughters. Alone. Budding new witches who display an alarming combined power no one understands. Too bad he hasn’t got a clue how to deal with them.

Little does Greyson realize that the new nanny sent to him by Legendary Consultants is the very witch he is hunting. When the truth is revealed, can these two opposing forces find a way to listen to their hearts? Or will Greyson have to follow orders and kill Rowan–the one woman who has made his soul come alive?

Praise for Bait N’ Witch:
✭✭✭✭✭ I swear, there were times when sparkly dust should be coming down, then again, there were times darkness and fear rode roughshod…Park your broom, brew some tea and settle in for some wonderful reading! –Tome Tender

✭✭✭✭✭ This book is another one in a series and somehow each book gets better! I loved this story. It was an unexpected way to move the story and give more information on some more characters. Rowan’s character is so likable and Greyson and his girls are charming. I can’t wait to see what this author’s next move for this series will be. Please don’t stop!! –Fanatical Paranormal Romantical

She raised her shaking hand to the door and glared at the offending appendage, annoyed at her inability to control the tremor. A shrill scream pierced the air, and Rowan froze mid-knock.

“What on earth?” Instinct had her reaching for the door knob.

A quick incantation sprang to her lips, but, before she could utter it, the door unlocked and swung smoothly open on its own. Rowan didn’t question, instead rushed inside. Following the sound of a struggle, including several more screams, she hurried down a long hallway off the foyer to what appeared to be the family room.

The scene she came upon had her hesitating in the doorway. Three identical girls, around the age of twelve or thirteen, flung spells at each other in rapid succession and with angry intent behind every blow. In their midst stood a tall man, his face pinched with frustration as he tried to put a stop to things.

As far as Rowan could tell, the girls were using their magic to disfigure each other. Even as she watched from the shadow of the doorway, one wailed as her hair sprouted, lengthening until it touched the ground in a waterfall of follicles.

“Now Chloe—” the man tried in a placating voice.

But Chloe wasn’t listening. “I’ll show you,” she shouted. With a whisper of words and a fling of her hands, one of the other girls suddenly turned bald.

Another piercing scream of fury rent the air.

The third girl laughed, and both her sisters turned on her together, faces red with anger.

“Enough!” Rowan snapped the word, voice full of authority, as she stepped into the room. With a wave of her hand, all three girls sat on the pale leather couch, mouths shut and hands in their laps, held mute and immobile by Rowan’s spell. She would not release them until they understood the consequences of their actions.

Thanks for being here, Abigail, and best wishes on your new release.