I'm excited to welcome Lois Winston today. I've been reading her books since the first Anastasia Pollack Crafting Mystery, Assault With a Deadly Glue Gun. :She is one of my favorite mystery writers. Total fan girl here. 😊 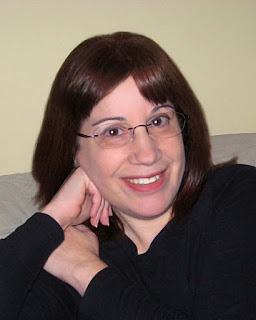 Welcome, Lois. Please tell us about yourself.

I’m a USA Today bestselling author who writes mystery, romance, romantic suspense, chick lit, women’s fiction, children’s chapter books, and nonfiction. My critically acclaimed Anastasia Pollack Crafting Mystery series received starred reviews from Publishers Weekly and Booklist, and Kirkus Reviews dubbed it, “North Jersey’s more mature answer to Stephanie Plum.” (I’m planning to have that etched on my gravestone!) In addition, I’m an award-winning craft and needlework designer and often draw upon my experiences in the crafts industry for much of my source material for characters and plots.

Most of the plot ideas (and some of the characters) in my books come from actual events I’ve experienced, observed, or read about in the news. I’m a total news junkie! For instance, Finding Hope was inspired by my cousin’s failed attempts at in vitro fertilization and a case in Virginia where a fertility doctor was secretly using his own sperm to inseminate his patients.

Literally Dead, the second book in my Empty Nest Mystery series was inspired by my experiences attending a certain national writing conference over the years (although to the best of my knowledge, no murders were ever committed at any of them.)

Truthfully? With few exceptions most of my family haven’t read my books. I wasn’t born into a close-knit supportive family, nor was my husband. Perhaps if I’d make it to the New York Times bestseller list, some of them might decide to pick up one of my books. Making the USA Today bestseller list certainly didn’t sway anyone. But you know what they say: you can’t choose your relatives.

To date I’ve written fifteen novels (including one middle-grade novel) and am working on the sixteenth. I’ve also written ten novellas and short stories, one critical essay that appeared in an anthology, and a nonfiction book on writing.

As for a favorite, that’s like asking a parent to choose her favorite child. However, I will say that there are two that stand out for me—Talk Gertie To Me because it was my first published novel and Assault With a Deadly Glue Gun because it launched my mystery writing career.

I learned that I had a lot to learn about writing a novel. But I didn’t give up. Twelve years and countless rewrites later, that book, Love, Lies and a Double Shot of Deception, sold to a New York publisher.

If you could give the younger version of yourself advice, what would it be?

Don’t go to art school! Major in something where you’ll have a good chance of making a decent living throughout your working life and won’t have to worry about spending your golden years living in a cardboard box on the street.

In my Anastasia Pollack Crafting Mystery series, Anastasia works as the crafts editor at a women’s magazine. To make ends meet after her dead louse of a spouse leaves her with debt equal to the GNP of an average third world nation, she moonlights at various craft-related jobs. At one time or another I’ve worked at many of the same jobs. I’ve been a crafts designer for several craft companies and a crafts editor for two craft book publishers. I’ve freelanced for many craft and women’s magazines. I’ve also worked trade and consumer shows and taught arts and crafts. In Death By Killer Mop Doll Anastasia works on a morning TV show. Although I’ve never worked in front of the camera, years ago I designed for several TV crafts shows.

That would depend on your preferred genre. If you’re a mystery reader, I suggest Assault With a Deadly Glue Gun, the first book in the Anastasia Pollack Crafting Mysteries. There are currently five full-length books in the series and three mini-mysteries. Each book can be read as a stand-alone, but I always feel it’s best to start a series at the beginning.

If you’re a romance reader, I’d go with Hooking Mr. Right. If you like your romance coupled with suspense, try Love, Lies and a Double Shot of Deception. For chick lit I recommend Talk Gertie To Me, and for women’s fiction, Finding Hope.

My latest release is Literally Dead, the second book in my Empty Nest Mystery series. This series is my homage to Nick and Nora Charles of the 1930’s Thin Man comedic mysteries, except I give a modern day twist to the husband and wife crime solvers, making the wife my sleuth and her college professor husband her sidekick.

As with my Anastasia Pollack Crafting Mystery series, my Empty Nest Mystery series falls into the amateur sleuth mystery sub-genre and combines humor and crime solving. 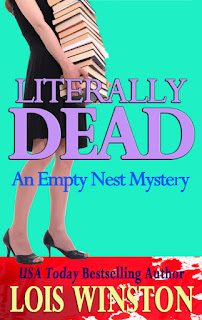 After her last disastrous episode as an amateur sleuth, Gracie Elliott is back. The budding romance writer has spent the past year crafting her first novel. Her hard work and determination pay off when her manuscript wins the Cream of the Crop award, a contest for unpublished writers, sponsored by the Society of American Romance Authors. First place entitles her to attend the organization’s annual conference, normally open only to published authors.

With husband Blake in tow, a starry-eyed Gracie experiences the ultimate fan-girl moment upon entering the hotel. Her favorite authors are everywhere. However, within minutes she learns Lovinia Darling, the Queen of Romance, is hardly the embodiment of the sweet heroines she creates. Gracie realizes she’s stepped into a romance vipers’ den of backstabbing, deceit, and plagiarism, but she finds a friend and mentor in bestselling author Paisley Prentiss.

Hours later, when Gracie discovers Lovinia’s body in the hotel stairwell, a victim of an apparent fall, Gracie is not convinced her death was an accident. Too many other authors had reason to want Lovinia dead. Ignoring Blake’s advice to “let the police handle it,” Gracie, aided by Paisley, begins her own investigation into the death. Romance has never been so deadly.

As I hauled myself up the first set of steps, that old adage about the road to hell being paved with good intentions popped into my head. Maybe this wasn’t such a good idea, especially given all the alcohol I’d consumed over the course of the evening.

By the time I reached the first landing, my heart pounded and my pulse raced. Jeez! Was I ever out of shape! I leaned up against the wall to catch my breath and wondered how many calories I’d burned climbing one flight of stairs. Probably nowhere near the number of calories in a frozen margarita. While I waited for my heart to slow down to normal, I pulled out my iPhone to ask Siri, only to discover I had no cell service in the stairwell.

I slipped my phone back inside my clutch bag. At least five minutes passed before I’d regained enough energy to continue. Grabbing hold of the railing, I inhaled a deep breath of fortitude and started my ascent up the next flight. No matter the number of calories, I was burning more than if I copped out and took the elevator the remainder of the way.

Halfway up the third set of stairs I heard what sounded like the fire door slamming open against the concrete-block wall of the stairwell. A split second later a bloodcurdling scream echoed above me. I looked up to find a billowing mass of tie-dyed rainbow chiffon plummeting toward me. As I flattened myself against the wall, Lovinia Darling’s body landed with a bone-shattering thud at my feet.

I didn’t need a degree in forensics to know Lovinia Darling was dead. The top half of her body sprawled upside-down on the steps in front of me, her lower half splayed across the landing above. Dull, lifeless eyes stared up at me. Blood flowed from a large gash in her skull where her head had hit the metal edge of the concrete step and dripped toward me. I quickly descended two steps to avoid the spatter.

My entire body shook as realization hit me. If I’d rested a second less on the landing earlier, Lovinia would have fallen directly on top of me, most likely killing us both.

I’d already come too close to death once this year, thanks to Sidney Mandelbaum. Once was more than one time too many, but did the universe take my needs into consideration? I stared at Lovinia. Apparently not.

I fought to keep my legs from collapsing under me. I knew I had to move. My phone didn’t work in the stairwell. Holding onto the railing for dear life, I inched my way back down the stairs to the floor below.

Once in the corridor, I crumbled into a heap on the floor. This particular corridor was in mid-remodel, the carpet already pulled up but new flooring not yet laid. I was too freaked out and tired to care about the plaster dust and assorted yuck covering the bare concrete and the damage it might do to my favorite little black dress. I fumbled for my phone, and with unsteady hands, managed to call 911.

One last question, Lois. Where can readers find you?

Thanks for visiting with us, Lois. I'm looking forward to reading more of your stories.