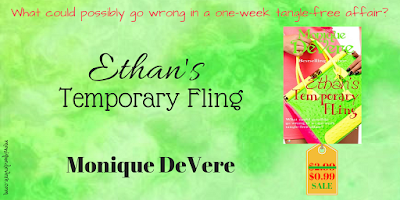 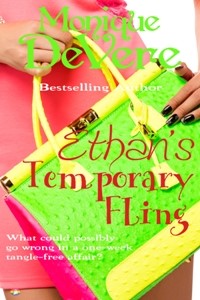 He’s so sexy he has the title to prove it!

Super-hunky, weight-loss celebrity Ethan Stone brings out Dr. Karis Van de Burke’s inner bad-girl. To prove it, when Ethan accepts the challenge to persuade the sassy, love-rejected cosmetic surgeon to appear as a guest on his show, she ends up inviting him into her bed for one night of guilty pleasure instead.

Used to women throwing themselves at him boobs first, Ethan knows his way around every female erogenous zone, but the sizzling chemistry he has with Karis blindsides him. Soon he’s convincing her to extend their one-night to another ... and another ... and...

Karis can’t resist! Yet, if Ethan discovers her secret, he’ll ditch her as fast as her ex-fiancé had – but really, what could go wrong in a one-week tangle-free affair?

Ethan Stone.
The reason his name seemed familiar was that his producers had been hounding her to agree to appear on a segment on his health and weight loss show. They claimed to want the sisters to try to mend their relationship so Andie could have closure.
Karis knew better than to put herself within arm’s reach of her sister.
The doorbell rang.
Karis puffed out a delicious sigh of relief and binned the carton. At eight p.m., it could only mean one thing.
“Thank the Lord—dinner.”
“What did you order?” Her mum’s chastising tone filtered into her ear. “Nothing unhealthy, I hope.”
“It’s usually a surprise. A few times a week my friend from the deli drops by with food. She knows I hardly have time to shop and takes pity on me.”
Karis practically bounded to the front door. She was star-ving. She yanked open the door, ready to devour whatever mouth-watering yumminess was on the other side and nearly dropped the phone.
Her mouth fell open. She blinked, unable to believe her eyes. For sure, something yummy stood before her, but not hers to devour—not that she wouldn’t have equally welcomed dinner in this form. She let her gaze roam down then back up again.
Ethan Stone—he of the title Sexiest Eye Candy To Lust After—towered outside her door. He was tall, far taller than she imagined from his magazine photo. At five-foot-eight—eleven in heels—she looked most men in the eye, but to do the same with Ethan Stone she had to tip her chin six inches.
She must have conjured some kind of freaky fantasy after snagging her own copy of the gossip magazine. Because there was no way Ethan Stone would be standing outside her door at eight-o-five at night in a dinner suit holding a single white rose as he unleashed that incredible smile. Karis glanced behind her to where she’d left the magazine, then back at him.
“Karis Van de Burke?” His deep intonation did something strange to her solar plexus. Made it quiver.
“Darling? Are you still there?” Her mum’s voice was an unwelcome intrusion.
“I’ll call you back, Mum.” She cut the call without taking her eyes off the man in front of her. He was striking, with a straight-edged aquiline nose, chiselled features so even and appealing she couldn’t stop staring. His hair was a lighter brown than his photo depicted, but his eyes ... those eyes were just as remarkable. Dark-blue rings surrounded the vivid blue irises, creating a contrast, which added a mysterious air that surely made him stand out in a crowd.
“Yes, I’m Karis Van de Burke.” She cleared her throat. What was up with her voice?
“I’m Ethan Stone.”
“I know who you are.” She tucked the phone behind her back so he wouldn’t notice her slight nervous tremor. “Why are you here?”
He offered her the rose. “I came to proposition you.”
She blinked. The evening sun was still bright and framed him in golden light, making him appear almost dreamlike.
He smiled. Someone should outlaw such a lethal smile. “I’m hoping you’ll let me take you out to dinner, ask you to reconsider my producers’ offer.”
Karis released her grip on the door and took the rose. “I’m sorry to inform you, you’re wasting your time, Mr Stone. As I’ve told your producer—Rob, was it—?”
“Ray.”
“Ray ... I’m not interested in becoming a circus act.”
“He relayed your thoughts on the matter. However, I was hoping you’d give me one hour of your time so I can—”
“Try to convince me to let you make a fool of me on national television?” She handed back the rose. “Thanks, but no thank you.”
His fascinating blue eyes flicked to her outstretched hand. He left her hanging.
Choosing that moment, her stomach growled a ravenous reminder.
“You’re hungry, and I’m offering to take you to dinner.” He sniffed the air. “Since I don’t detect the aroma of food, I think I can safely presume you haven’t eaten yet.”
“I was just on my way to pick up something.”
His smile told her he knew she was fibbing. “In that case, will you allow me to join you?”
Arm tiring from its outstretched position, Karis drew the rose back and placed it, along with the phone, onto the side table next to the door.
“So you can talk me into appearing on your show?”
“Because I’m hungry too, and I’d like an opportunity to share my ideas for your sister’s follow-up episode, in the hopes you might consider rethinking your position.”
She couldn’t hold back the wicked smile tugging the corners of her lips, so she bit down on her bottom lip. Any position involving Ethan Stone did deserve some consideration.

*~*
QUOTE: “If you love your romance with a dose of humor, this is the book for you. Monique DeVere is a master at tugging at your heartstrings and your funny bone, all at the same time. Highly recommend!” ~ Alicia Dean

Author Bio
Monique DeVere is a full-time author of Sweet 'n' Spicy Romantic Comedy and Contemporary Romance. She also writes Christian Supernatural Suspense movie scripts. She was born on the beautiful island of Barbados, where she grew up on a large plantation with enough wide-open space to let the imagination run free. She moved to the UK as a teen and shortly after met and fell instantly, and irrevocably, in love with her very own strong-silent-type hero. When Monique isn’t writing or spending quality time with her family, she likes to armchair travel to distant and exciting parts of the world and considers herself to have the best job on earth.
You can visit her at moniquedevere.com where she invites you to join her exclusive Sweet ‘n’ Spicy Readers Club packed full of goodies for her members. Monique loves to hear from her readers, do contact her at monique@moniquedevere.com.

Where to Find Monique: