Blurb:
Former Navy SEAL Sebastian “Bash” Lockard died in Afghanistan after leaping on a grenade to save his comrades. Little did he know his act of heroism would grant him a ticket into Heaven’s elite army as one of the few and powerful Archangels. Struggling with his new existence, Bash still retains his human memories, leaving behind a wife he loves with all of his heart. Although he’s forbidden to see her, he can’t resist her lure, or the mortal desires he harbors for her.

As a young widow and nurse, Irene Lockard still mourns her husband two years after his untimely death. His absence is everywhere, and when her best friend weds, she hits an emotional rock bottom. As if summoned from the skies above, Sebastian appears before her, and they share an unforgettable night. But when he once again vanishes, she wonders if she’s truly gone mad with grief.

The only way Sebastian can remain with Irene is if he makes the ultimate sacrifice. But will she overcome her fear of losing him again to another war? 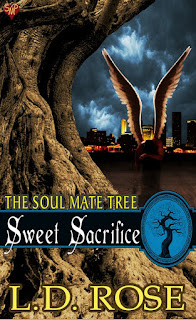 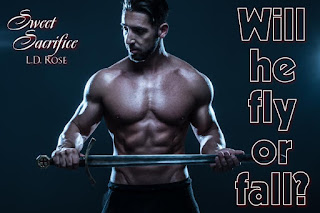 Snippet:
Bash’s gaze caught on a couple on the dance floor, the sight of her sinking into him like hooks and bringing him to a standstill.

With her dark curls springing over her shoulders, she spun across the hardwood, her pale gray dress flowing around her. Much like in his recent vision of her, she tipped her head back and laughed, beautiful, stunning, her smile as bright as the yellow calla lilies tucked in her hair. She swayed with a man in dress whites, a Marine, another fucking soldier she didn’t belong with. And as the rain of realization became a downpour of comprehension, he remembered the engagement, where Claude proposed to Lucille—at their wedding—right before Bash left for another tour of Afghanistan.

“Bash?” Gabriel stepped in front of him, blocking his view, pale eyes narrowed.

Bash’s hand slammed into Gabriel’s chest, pushing him away as he lurched forward. Gabriel reacted faster, though, snatching his arm and wrenching him back at least four feet. Bash lunged again and the Arc’s hand fisted in his white button-down shirt.

“Don’t,” Gabriel growled, all humor draining from his angular face and setting his expression in stone. “Do not.”

Bash’s heart punched at the angel’s fist, every fiber of his being burning with the urge to run to her, to wrap his arms around her and feel her body against his one more time. Envy, rage, longing, and sadness blasted through him in a toxic tornado of emotion ready to whip this place into oblivion.

He nearly ground his molars into pulp. “Let. Me. Go.”

“You are dead, Sebastian. You’re no longer part of this world. All you’ll do is bring her pain, bring yourself pain. Don’t do this.” Twin streams of air whistled from the Arc’s nostrils as he shook his head. “I should’ve never brought you here.”

Bring him pain? More pain than he’d already endured? No. 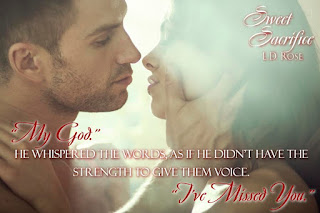 Bio:
L.D. Rose is a neurotic physician by day, crazed writer by night, and all around wannabe superhero. She writes paranormal romance and urban fantasy, but she's been known to delve into horror, sci-fi, and medical suspense on occasion. L.D. Rose is a PAN member of the RWA, FF&P, NEC-RWA and CoLoNY. She currently lives in Rhode Island with her studly hubby, her hyperactive boxer, and her two devious cats.

Sign up for her newsletter for the latest on the Senary, sneak peeks, giveaways, and other fun stuff: http://eepurl.com/bKvuXD. You'll receive a free horror short story with sign-up!

Where else to find her: