My guest today is Jean Davis, my cohort in book events. I've learned more from Jean about setting up book displays and finding occasions where I can offer my books for sale. I'm excited to share her new release. See my review at the bottom of the post. Here's Jean.


Thanks, Diane, for having me on your blog. I'm excited to share my new release, Trust. This is the first book in my new space opera series, The Narvan.

Vayen trains to fight a war that ends before he ever sees action. He's not very happy about it. His family lost their lives to Artor's war with Jal and he'd had his sights returning those loses. Instead, he's stuck in a going nowhere factory security job.

The reason for this peace is a human woman, one Anastassia Kazan, advisor to the Narvan System. Now, years later, she's offering him a job as her bodyguard. His training qualifies him for the duty and all the zeros in the paycheck will offer him the kind of future he'd only dreamt of. If he can gain her favor, he just might have some influence on the lives of his people and those of the damned Jalvians.

Anastassia was engaged to his much older brother, the one who died fighting beside her in the war. That he happens to look just like. That she trusted to have her back.

Will she ever see Vayen or is he only the living ghost of his brother?


Excerpt:
She grabbed her glass and gripped it tight. “Killing me isn’t quite that simple. My contacts have their orders should I disappear.”

Her partners had turned on her. But she knew me. She knew my brother. “You have to know I’d never—”

“Save your breath. You all do it eventually.”

My heart dropped. Did she really think I was just another partner waiting to betray her?
A slight slur edged her words. “Quit with the sad face already and get me another drink. While you’re at it, get yourself another too. Enough with nursing that lukewarm thing.”

I found myself in true need of a drink to wash down her accusation.

When I returned to the table, her chair sat closer to mine.

“You need to relax more. Smile once in awhile. Go out and enjoy an off-shift with some friends,” she said.

“I’ll keep that in mind.” I’d given up the few friends I had when I’d hired on. Training and learning all I could to help her filled my off-shift hours. The only person I had left to relax with was Merkief, which we did manage to do from time to time.

While I did sip more avidly at my second drink, I didn’t plan on having another in our current surroundings. “We should get back soon. Jey is already ticked that I took most of his shift.”

“In a while. You need a couple shots first.”

“Jey and I have enough issues without him catching me drunk with you.” Not to mention, getting drunk with my boss screamed bad idea. 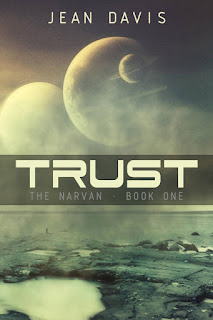 War has torn Vayen Ta'set's homeworld apart. It took away his parents and then his brother, leaving him alone. He's spent his life training to join the fight, to do his part, to bring peace to Artor. But the war ends before he's able to join in, quietly brought about by a human, Anastassia Kazan. When she offers him a job as her bodyguard, he's sure he's finally found his place. He's wrong. She's not who he thought she was. The peace she brought to Artor, to his entire star system, comes with a cost. One he's now helping her pay. There are bigger enemies out in the known universe than he ever imagined. Without Kazan, deals and truces will crumble. War is just a death away. Neck deep in Kazan’s world of bribes, blackmail, and assassins, Vayen must eliminate the threats to his boss and his homeworld without becoming a target himself. It’s hard to make your mark on the universe if you’re dead.

Jean Davis lives in West Michigan with her musical husband, two attention-craving terriers and a small flock of chickens. When not ruining fictional lives from the comfort of her writing chair, she can be found devouring books and sushi, weeding her flower garden, or picking up hundreds of sticks while attempting to avoid her yard’s abundant snake population. Her focus is bringing strong, capable women to speculative fiction.

Trust. How much do we trust each other? Do we trust our lover/spouse unconditionally? What about our bosses? Their bosses?Everybody has secrets, their own agenda. In Jean Davis’s new release, Vayen starts out rather naïve. People are who they say they are. Wrong. He learns the hard way that what people say isn’t always the truth. When Anastassia hires him as her bodyguard, she says it’s to keep the peace in Artor. But is it really? Is it the only reason? That’s where trust comes in.Anastassia trusted the wrong person once. Now, he’s out to kill her. Can she trust Vayen to protect her?Fantastic world building and complex characters make Ms. Davis’s story compelling. Just when you think you’ve figured out where the story is going, a twist surprises you. Get ready for an out-of-this-world adventure.