Author Judy Ann Davis, a friend and fellow member of Authors Helping Authors, and I are doing a blog swap. I was on her blog yesterday, and she's here to tell us about her newest release. 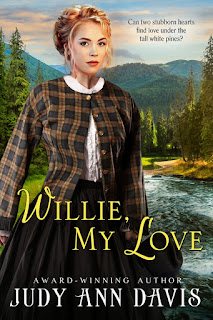 The year is 1856. White pine is king of the forest.
The last thing Jonathan Wain wants to do is ride miles through Pennsylvania’s wilderness to help his father’s logging partner in the small settlement of Clearfield. His family owns clipper ships in the Chesapeake Bay that carry the coveted logs to the markets each spring, and they can’t afford a loss.
The last thing Wilhelmina Wydcliffe wants is a handsome sea captain from Maryland meddling in her father’s logging operations under attack by unknown enemies. A feisty tomboy and better known as Willie to her crews, she has a dream to be the largest logging operator east of the Mississippi River.
When both Willie’s and Jonathan’s lives are threatened, they are forced to work together to find their enemies before both of their companies are in shambles.
But as their attraction to each other escalates, can they set aside their differences, unearth the truth and troublemakers, and discover contentment in each other’s arms?

EXCERPT:
Smiling, Jonathan took Willie’s proffered hand and shook it, without releasing it. “To show you I bargain in good faith, I offer your pistol as well.” With his free hand, he pulled her small, single shot, dueling pistol from his waistcoat and placed it in her open palm.
“But I have absolutely nothing to trade,” she said with a haughty theatrical voice.
“Ah, ha,” he whispered, pulling her close to him. “A kiss, perhaps?”
Her voice exploded as she tried to push him away. “Why you arrogant scoundrel, I ought to shoot you with this gun.”
His face moved closer. She gasped in surprise before his mouth swooped down on her lips. The kiss was brief, but soft and bewitching, and when he released her, she skidded safely backward.
“Now tell me,” he crooned in a velvet voice. “Why do you carry a loaded pistol?”
“For rattlesnakes.” Her hand fell to her side, the pistol enclosed in the folds of her dress.
“And the knife?”
“To cut off their rattles.”
He laughed, his hearty chuckles filling up the room and silence around them. “I'd rather sit naked with the rattlesnake than with you so heavily armed.” 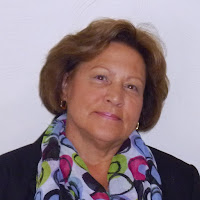 Judy Ann Davis began her career in writing as a copy and continuity writer for radio and television in Scranton, PA. She holds a degree in Journalism and Communications and has written for industry and education throughout her career.

Over a dozen of her short stories have appeared in various literary and small magazines, and anthologies, and have received numerous awards. To date, she was written five novels, a collection of short stories, and a novella. Her works encompass romance, mystery, western, and paranormal in the historical as well as the contemporary arena. Her last novel, Four White Roses, was a finalist in the Book Excellence and Georgia Romance Writers’ Maggie awards.

When Judy Ann is not behind a computer, you can find her looking for anything humorous to make her laugh or swinging a golf club where the chuckles are few.

She is a member of Pennwriters, Inc. and Romance Writers of America, and lives in Central Pennsylvania.

TIDBIT OF INFORMATION:
“Willie, My Love” developed from my curiosity of the logging industry in the 1880s in my town of Clearfield, Pennsylvania. The manuscript was so large, I had to cut it from 114,000 words to 96,000. That was the most difficult part of the entire process.