It's my pleasure to welcome my friend from Canada, Jessica E. Subject. Jess has posted snippets from her new release on Weekend Writing Warrior (#WeWriWa). I've read some shifter stories but never a shifter who turned into a bunny. Don't laugh. Okay, I admit. I think bunnies are cute. I'd better not give anymore away. Here's Jessica to tell you about Bunny Omega on the Run. 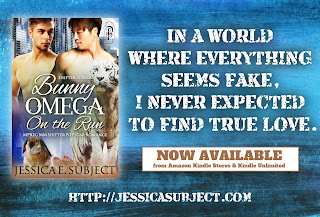 Two Truths and a Lie


Thank you so much to Diane for having me back as a guest! I’m super excited about my new release, Bunny Omega on the Run, a story about a sexy tiger alpha and a cute bunny omega. For this post, I decided to try something I’ve never done before. I’m going to tell you two truths and a lie about my story. It’s up to you to decide which one is the lie. I’m curious to see who gets it and who doesn’t.

1. The two cities mentioned in the story are Saramto, where the story is set, and Torago. These cities don’t exist that I’m aware of, and I created them by combining words.

2. I named TK, the alpha hero of the story, using those initials for his stage name, as they mean to kum, a printer’s expression meaning there is more material to come. He is always writing new music, so there is always more music (material) to come.

3. This story is about a tiger shifter and a bunny shifter. While I’ve always loved tigers, I’ve also had several rabbits as pets. Their names were Eric, Matthew, Jenna, Sebastian, and Hop.

Okay, so which one is the lie? 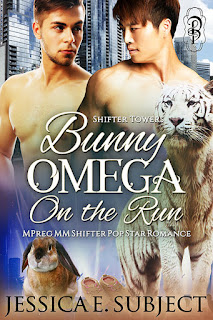 BUNNY OMEGA ON THE RUN

As a pop star, I never expected to find true love.

Not in a world where everything is temporary and often fake. But then he ran into me. Not once, but twice. My tiger instantly recognized him as my mate. Now, I just have to convince Kish that what we have is real.

The oldest of ten kids, I saw what my mother went through after my father left. After that, I started taking blockers so I would never go into heat, never have kids. Because love was for the weak. And I was doing just fine on my own.

Then I met TK. Literally smacked right into him. But no matter how much I wanted it to be true, I refused to believe that he could love a bunny shifter from the wrong part of town.

Bunny Omega on the Run is a super sweet with knotty heat MM mpreg shifter popstar romance. It is book 1 of the Shifter Towers series but can be read as a standalone.

A triumphant and heartfelt first foray into mpreg by one of our favorite authors – Lorelei M. Hart

I eyed the barrel of the 9mm pointed at my face. Clutching my hands behind me, I tried to hide the excessive shaking throughout my body. “It’s okay. You can pay me later. I’ll...I’ll just be going.” Anything to get away from there alive.

The lanky, bald man in the black suit clicked the safety off. “There won’t be another time.”

Without waiting for a shot to be fired, I spun around and bolted down the street. I had no time to shift. I simply ran. Over fences. Through yards. Down one alley after another. I didn’t stop. Couldn’t stop. My mom and siblings depended on me. I couldn’t help them if I was dead.

After what felt like forever, my thighs burned and chest ached. I had to stop. Or at least slow down. But I didn’t know if I was still being pursued. I dared a glance behind me. No one. Thank fuck! It was time to slow down. Shift and find a place to hide.

I slammed into something hard. Someone hard. Liquid terror filled my veins. Somehow the guy in the suit had outsmarted me. I was dead. Gone. No chance to say goodbye to my family. My knees gave out, and I crumpled toward the ground. But strong arms caught me, lifted me back up. Did the man want to stare in my face when he killed me?

“Whoa, whoa. It’s okay, little omega. I won’t hurt you.” The man pulled me closer. Tight into his broad chest.

And that’s when I smelled the wild, rugged scent. A predator. Not the human who had been chasing me, but a tiger. I was in the arms of one of the most dangerous types of shifters in the world. But when I dared a glance up into his eyes, I only saw a concerned alpha. One whom I instantly recognized. TK. The pop star dominating all of the music charts. I’d had no idea he wasn’t human.

Filled with a new fear, I slowly backed away. Being anywhere near the star, I’d have more than one man with a gun after me. If he didn’t take me out, someone else would.

But TK didn’t let go so easily. He cupped my elbows, keeping me steady. “What were you running from?”

I didn’t answer. Behind TK, men in black suits—not cheap knockoffs like my pursuer had
worn, but actual designer brands—eyed me, waiting for me to do something stupid.

Needing to prove I offered no harm, I shifted. In my shifted form, there was no way I could harm their charge.

I expected to fall to the ground and hop away. But TK didn’t let go of me. He held my scruff. “Oh my! You are the most gorgeous bunny I have ever seen. Just as beautiful as when you were in your human form.” He released his grip and stroked behind my shoulders. Then in between my ears. “You are just adorable with one ear up and one ear down.”

Jessica E. Subject is the author of science fiction romance, mostly alien romances, ranging from sweet to super hot. Sometimes she dabbles in paranormal and contemporary as well, bringing to life a wide variety of characters. In her stories, you could not only meet a sexy alien or two, but also clones and androids. You may be transported to a dystopian world where rebels are fighting to live and love, or to another planet for a romantic rendezvous.

When Jessica is not reading, writing, or doing dreaded housework, she likes to go to fitness class, listen to BTS, and walk her Great Pyrenees/Retriever her family adopted from the local animal shelter. 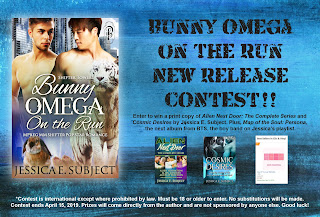 Enter to WIN a print copy of Alien Next Door: The Complete Series and Cosmic Desires by Jessica E. Subject. Plus, Map of the Soul: Persona, the next album from BTS, the boy band that has a permanent place on Jessica's writing and life playlist.

*Contest is international except where prohibited by law. Must be 18 or older to enter. No substitutions will be made. Contest ends April 15, 2019. Prizes will come directly from the author and are not sponsored by anyone else. Good luck!
WHERE TO ENTER: