Move is a 4-letter Word

When I mentioned my up-coming move, a friend understood the difficulty and her comment provided the title of this post. This will be my eighth move since leaving my parents’ house, which technically makes it my ninth. And one I’m really looking forward to. That wasn’t the case for several others.

My first move was the shortest. While it was the best move, I can’t say it was the easiest. Our troop of friends and relatives carried my belongings from my apartment on the third floor across the parking lot to my new husband’s, also on the third floor. The next best move was to our new first house. Thrilling and scary at the same time. Scary because we were taking on a mortgage. Holy cow. We were grown-ups now. Thrilling because this was our home. Not our parents, not an apartment complex—our home.

The next five moves came about because of Hubs’ job. At first it was an adventure. Still, we were leaving family and friends. While it was my job to keep up morale with the kids, I cried silently as we drove out of Michigan. It then became an adventure again. Each move I thought would be our last. Wrong. But our family was together. As I told the kids each time, home is where we are all together. They weren’t happy (what an understatement) about moving in high school, yet they met their life-long friends in the new school and daughter met her husband there. I made good friends and became very involved in the community. Maybe I became complacent and Fate decided to shake me up. Another move and the kids weren’t coming with us. My family wouldn’t be together. Anger, tears. Poor Hubs didn’t know what he’d find when he came home on weekends. Like many who move because of a spouse’s job, I sucked it up.

By then, I knew nothing was permanent. We didn’t bother with 30-year mortgages anymore. Five-year ARMs were fine. We wouldn’t be there that long anyway. We weren’t. Two and a half years later we moved again. That was our shortest stay. Having been uprooted so many times, I didn’t get invested in the new community. I had friends on one side of the state and family on the other with us in the middle. I had my writing and writers' group. I didn’t need anything else. Besides, we would probably move again. I just had to wait for that shoe to fall. Wouldn’t you know this has been the longest stay—over thirteen years.

After all those moves, why am I looking forward to this one? First, it’s close to our daughter and her family—our only grandchildren. Second, it’s where we always wanted to retire. Third, we’ll be moving into a brand new house. Not someone else’s where we’ll have to repaint, tear down wallpaper, add a fence for the dog, etc. We’ll move into a house designed the way we want it, painted with colors we chose. Sure there were compromises we had to make because of cost. But this will be a house suited to us. More exciting than our first house. And this one will be our last.

For four months we’ve watched the progress as concepts on paper turned into reality. From an empty lot to a hole in the ground to what looks like a finished house—on the outside. Inside is another story. Still a little rough. The builder tells us we’ll be able to move in the first of September. From the progress we’ve seen so far, I’m inclined to believe him.

In previous moves, a horde of professional movers descended on the house then packed our belongings and loaded the truck in three days. We don’t have that luxury this time. As Hubs and I pack, we’re deciding what goes with us and what finds a new home—garage sale or trash. More than a little daunting. So I’d better get off the computer and . . . 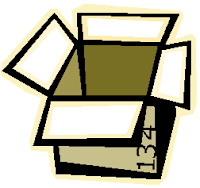 Pack is a 4-letter word.