Here's another peek at my science fiction romance, Switched Resolution. 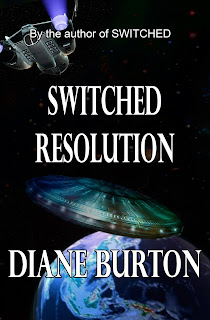 Six long months of lost time. Time while she despaired of him returning. Time they would never get back. Despite the fact that the breakout of war was not his fault, he could not control the guilt he felt over her anguish. If his superiors had had their way, she would still fear he would never return. If it wasn't for his twin . . .
As hard as he found it to assimilate himself into life on Earth, Marcus often wondered how his twin fared as captain of the Freedom. Each time Marcus thought of the enormity of what he had done, he worried about the ship, the crew. What if— Maybe he should have—
No. This was where he wanted to be. Here, on Earth, on a farm near Ann Arbor, Michigan. With Jessie and their unborn babies. It truly was. He had no regrets.
"Max," Jessie yelled at the barking dog. "Friend."
The animal dropped to his haunches, tail wagging, tongue lolling. There were times, not often, when the dog actually obeyed. After the woman got out of the car, she stooped and petted Max who sat obediently for three seconds before tearing off after a flock of birds. His big feet—which Jessie said he hadn't grown into yet—tangled, and he tripped. He rolled over, flipped back onto his feet, shook himself off and raced after the birds.
Laughing over the dog's antics, Gloria Cherella—the woman from whom Marcus had received half his genetic makeup—walked toward the workshop, her head high, spine straight, with a little bounce to her step. She wore a red and white checked blouse tucked into the waist of blue jean capris and white tennis shoes. Her golden brown hair, cut in a short bob, feathered her plump cheeks. Nicely rounded, with laugh lines around her eyes and upturned mouth, Gloria Cherella was a sharp contrast to his Serenian "mother", with her worried eyes, pinched mouth and tightly-controlled manner. From Gloria's face, Marcus could see her open happiness.

Switched Resolution is available at Amazon and Smashwords.

To read Sneak Peeks from other authors click here.
Posted by Diane Burton at 12:01:00 AM