I'm happy to welcome back author Nancy Jardine. Nancy's research for her Celtic novel, The Beltaine Choice, is phenomenal. I hope you'll enjoy her article as much as I did. She's here to tell us about blowing one's own trumpet.

My thanks to you, Diane, for inviting me here today - it’s lovely to pay you another visit. I’ve got something very dear to me that I’d like to share with you and your readers.

Like many authors I personally know, I have a great dislike of blowing my own trumpet to drum up interest in my novels. We all know that huge spectre that sits on our shoulder saying just get on with the creation of new tweets, or write this blog article, do the interview answers that have been sitting for a week in the in-tray, or get on with that guest post I could have done months ago. (Apologies- Diane!) I look at the photo of the Celtic warrior blowing his own trumpet and it makes me feel tired without even feeling how heavy that instrument is!

It’s confession time right now. I was late in writing this guest post since last week was a time when my Crooked Cat novels were in a summer sale and I had to blow my own trumpet – a lot! I’ve also been in full writing mode when I have that ‘desk’ time available to me – that is when I’m free of other domestic goddess duties – like housework, gardening and grand-childminding. The housework has gone to hang. The garden is only a little bit wild now, but the child won’t wait – at least two days a week. But surely I’ve got lots of time in between? Well…I spend far too much ENJOYABLE time dithering, doing what I call research for my current writing. I’m probably an 80% pantser so I’ve been doing a lot of that ENJOYABLE diddling around – you know that stuff called necessary fact-finding, for my second historical novel?  So it’s time to share about CARNYXs… no… / slash that… the plural seems to be CARNYCES.
That lovely instrument held high up in the air in the photos is called a Carnyx- a Celtic war trumpet. I’ve known about carnyces for ages, from research years ago, but didn’t really take time to find out more about them, save that they make a very loud lugubrious noise when sounded.

I’m at that tidying up stage in my novel writing that I call ‘extended first draft’. This is the period after the novel is complete- almost- except there’s always some little thing that could be changed. In my Battle of Mons Graupius scene where the Caledonian Celts face down the mighty army of Rome, the carnyx is sounded to warn the Celtic warriors that battle has commenced. Except in my novel there are more than one of these noisy instruments, and I didn’t know how to spell, or even say the plural! Research is such wonderful thing.

I look at this second carnyx photo and think the poor Celtic warrior looks totally ‘lifeless’ but I think the carnyx looks like its having a great laugh! So that’s what I must do with all my marketing duties. Even if my energy flags I need to pick myself up, and smile like that laughing carnyx while blowing my own trumpet. 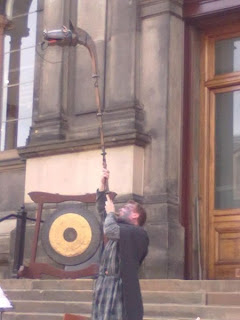 This third photo I love the most since this replica carnyx was specially played on the 29th July 2011, on the steps outside the newly reopened, refurbished, National Museum of Scotland. That in itself is a lovely Celtic gesture, but the significance is even better for my current writing. It was found in a place called Deskford, in the north-east of Scotland. The head of the carnyx is meant to resemble a wild boar, the decoration of the metalworking meant to be like the folds of the boar’s skin.

The original artefact was found in 1816, but the dating for it is thought to be in the range of AD 80- AD 200. The Deskford carnyx is a uniquely Scottish design, although carnyces were known to be played throughout Celtic Europe. A significant part of its uniqueness is that it’s made from sheet bronze and brass. Brass is not native to Scotland, so it’s thought the brass content was originally of Roman origin, and is effectively recycled Roman brass.
http://commons.wikimedia.org/wiki/File:NMoS_Carnyx_war-horn_at_museum%27s_reopening_02.jpg

The Battle of Mons Graupius (location not quite proven) was the last recorded major battle on the soil of Britannia (modern Great Britain) between the Romans and the indigenous Celts, and took place around AD 83/84.

It suits me very highly to think that the Deskford carnyx-  remains of which currently reside in the National Museum of Scotland - was played at the Battle of Mons Graupius for two reasons. Deskford is only around 20 -25 miles away from my battle site at the distinctive hill range called Bennachie. (Bennachie being one of the prime contenders for the battle location) My second reason is much more whimsical. In my novel, the Roman Army are a little bit peeved at times that consignments of metals and highly prized objects- like Roman coin- are the subject of numerous successful raids!

So, when I need to get out there and blow my own trumpet I’m going to be thinking about that carnyx.

What do you think about when you have to blow yours?

http://www.nms.ac.uk/highlights/objects_in_focus/deskford_carnyx.aspx
(This National Museum of Scotland site is great site to learn more about the Deskford carnyx)

Additional information on the carnyx-  http://en.wikipedia.org/wiki/Carnyx

Nancy Jardine lives in the fantastic ‘castle country’ of Aberdeenshire, Scotland, with her husband of many years. She spends her week making creative excuses for her neglected large garden; doesn’t manage as much writing as she always plans to do since she’s on Facebook too often, but she does have a thoroughly great time playing with her toddler granddaughter when she’s just supposed to be ‘just’ childminding her twice a week.

A lover of all things historical it sneaks into most of her writing along with many of the fantastic world locations she has been fortunate to visit. Her published work to date has been two non fiction history related projects; two contemporary ancestral mysteries; one light-hearted contemporary romance mystery and a historical novel. She has been published by The Wild Rose Press and Crooked Cat Publishing.