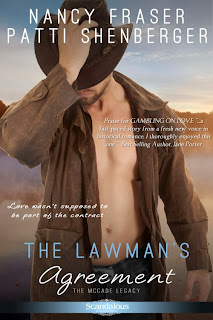 U.S. Marshal, Zack McCade takes pride in protecting the good folks of Greenville—especially the beautiful Dr. Suzanne Martindale. He doesn’t always understand her need for independence, but he sure does like getting under her skin. It’s not like he’s looking to settle down—his job is too dangerous to risk taking a wife and family.

In an era when women aren’t readily accepted in the male dominated world of medicine, Suzanne doesn’t have time for courting—especially a charming Cajun rogue like Zack. When he proposes a fake betrothal to keep the matchmaking town out of their hair, she’s sure it’s a bad idea, but can’t deny her longing for a respite from the over-zealous bachelors in town.
Their ruse starts a fire in their hearts that neither expected, but will the re-emergence of Suzanne's real fiancé douse the flames?

Other links will be up on the Entangled Website the day of release.

“I heard the yelling,” Suzanne confirmed. “I thought for a moment when the door opened that I was getting a customer.”

“No, it was just two half-drunk gamblers fighting. I don’t think either of them was sober enough to do any damage, even if they had landed a solid punch.”

“Much to the crowd’s disappointment, I’d imagine.”

He chuckled. “Yeah, something like that. You know how the working ladies and bar patrons love a fight.”

“It’s been quiet around town lately. Not much for a decorated marshal to defend.”

“Now why would I do that? If you were to leave, who else would I have to argue with?”

“We don’t argue,” he said, his gaze meeting hers in challenge. “We discuss…heatedly.”

“It only gets ‘heated’ when I’m winning.”

He shook his head and leaned back against the side of the desk. “If you say so, cher.”

“As to your offer of an escort, I can see myself home, Marshal. There’s no need to wait.”

“I’d feel better if you let me escort you.”

She sighed deeply, and Zack waited for her to launch into another of her “independent woman” speeches. Or, at the very least, remind him that he was being over-protective.

“I’ll only be a minute or two, if you insist on waiting.”

She could have said she needed another hour and Zack would have gladly stayed. Despite what he’d said to Pete Bailey earlier that evening, Suzanne Martindale was a breath of fresh air among the over-zealous horde of ladies hounding his every move. She was beautiful, well-educated, independent, and beautiful.

Zack shook his head, trying to shake the repeating thought free. Obviously, no matter what her many assets, her beauty was the one thing tying him up in knots. Or, maybe, it was the fact she didn’t use it to her advantage, as some of the other ladies did. Instead, Suzanne relied on her brains and taunting sense of humor to get her where she wanted to go.

“All set,” she said, drawing Zack from his mental inventory of what made Suzanne Martindale the most desirable woman he’d ever met. And, at the same time, not at all what he was looking for in a wife.

Once she’d locked the door to the clinic, Zack offered his arm. Nodding toward the hospital next door, he asked, “Do you need to stop?”

“No, the night nurse is there, and our only patients are the new mother and babe. They’re in good hands.”

They strolled along in comfortable silence until they’d reached the walkway leading to the small stone cottage where Suzanne lived. She stopped just short of the gate.

“Shall I walk you to the door?”

“This is fine, thank you, Marshal.”

She met his gaze, rolling her eyes for exaggerated emphasis, he supposed. When she shook her head, a small lock of blond curls fell free of its pins. Zack’s hand itched to take the silky strands in his fingers and tuck them back where they belonged.

Her continued attempts at formality amused him and he asked, “Tell me something, cher, do you ever let your hair down and just relax?” Before she could answer, he added, “Have any of your friends ever been tempted to call you Suzie?”

She paused briefly before saying, “Only those who wished to be soundly kicked in the shins.”

When not writing (which is almost never), Nancy dotes on her five beautiful grandchildren and looks forward to traveling and reading when time permits. Nancy lives in Atlantic Canada where she enjoys the relaxed pace and colorful people.

Patti is a wife, mother of two, mother-in-law of two, brand new grandmother to a beautiful baby boy and pet mommy of two. Patti resides in Michigan, where she complains about the heat in the summer and the snow in the winter. When she’s not writing, Patti can be found with her nose buried in a book.

Nancy & Patti are giving away a digital copy of The Lawman's Agreement or Gambling on Love, to two lucky commenters. Please leave your email address along with your comment. Drawing will take place Sunday evening.