'Tis the Season To Be Kissed by Amy Andrews 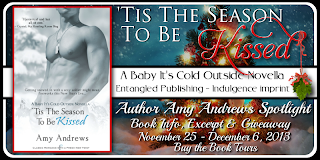 A down-on-her-romantic-luck kindergarten teacher plans to drown her New Year’s Eve sorrows in a gallon of spiked eggnog, but the arrival of her best friend’s sexy brother threatens to melt the snow piling up outside the tiny Vermont cabin.

Sergeant Luke Jackson had gone straight into combat mode at the sound of the blood-curdling banshee yell, and it took several seconds for the adrenaline spike to release him from its grip long enough to compute the fact that there was no danger. He had no idea who was beneath him, but the landing had been too soft to register it as a threat.

Still holding firm to the attacker’s splayed wrists, his father’s old putter discarded and well out of reach, he looked down into stormy gray eyes. He may only have been able to see an oval cut-out of her face from the confines of the hood she had pulled tight around her head, but it was definitely a woman. No man owned such delicate bone structure and had a nose as cute as that.

“What the hell?” he demanded back at the woman moving ineffectually underneath him. He’d just trudged two miles through a freaking blizzard from the bus depot to be greeted like this?

“Get off me right now you…giant…ass!”

The woman stopped struggling and glared at him. “Hey buddy, this is my house. I get to ask the questions and you”—she struggled some more—“are”—more interesting squirming, shoving, and pushing—“squashing me!”

Luke pushed away immediately and stood towering over her. She looked like a felled Eskimo in full winter regalia. “Ma’am, I don’t know who you are, but I think you’ll find that this is my house.”

She gave him an indignant look as she lay there waving her arms and legs like a stranded beetle. “While I appreciate your manners,” the beetle with the elfin nose and pixie cheekbones said, “I’ll have you know that this cabin belongs to the Jackson family.”

He offered her his hand to help her up, fearing that with all those clothes thwarting her attempts she would never make it unaided.

The angry pixie’s eyebrows knitted together as she glared up at him, but reached her mittened hand for his anyway. “Nice try. Luke Jackson is in Afghanistan and I think impersonating a US soldier on active duty is”—she paused as Luke pulled her to her feet—“beneath contempt.”

Luke didn’t bother to look at the portrait of him and Georgia that he knew hung on the wall to his right. He just jerked his thumb toward it and waited patiently for the penny to drop. The woman blinked at the picture as if she was having trouble seeing it. She peered at him, then back at the wall, then back at him, squinting and scrutinizing it carefully, as if she’d been asked to pick him out of a lineup.

The picture had been taken a few years back on his return from his first tour to Afghanistan, but he hadn’t changed that much.

Not anywhere that was visible, anyway.

And then he heard her gasp and watched as her face fell. Yep. Now she was with the program.
“Oh God,” she groaned as she lurched away, heading for the low table next to the couch, picking up a glass, and taking a hefty swig before facing him again. “I’m so, so sorry. I thought you were a looter…or a burglar…or at the very least up to no good. I didn’t know you were home. Georgia was so disappointed you were going to miss her thirtieth birthday party and if I had known, I would never have yelled and attacked you with a golf club. I teach kindergarten…we use our inside voices, we keep our hands to ourselves…”

Luke folded his arms across his chest, amused at the horror on her face. She obviously wasn’t a violent person. Which only made her actions at defending his family cabin that much more endearing. “You’re Tamara, aren’t you?”

The pixie raised her glass in salute. “That would be me.”

She nodded then stopped abruptly. “Wait.” She frowned. “How do you know about me? Georgia and I haven’t known each other that long.”

He shrugged, noting the way her gaze traveled over the contours of his shoulders. Interesting. “Georgia writes a lot of newsy e-mails.”

“Ah,” she said and swayed a little.

Luke reached out a hand. “Ma’am?” he asked, looking at her a little closer. Pink cheeks. Red nose. Unsteady on her feet. A waft of …eggnog?  “Are you…drunk?” 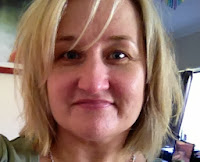 Amy Andrews is an award-winning, best-selling Aussie author who has written thirty + contemporary romances in both the traditional and digital markets. She has written for Harlequin Mills & Boon, Entangled, Harper Collins and Momentum.
To date she’s sold over a million books and been translated into thirteen different languages including manga.She loves her kids, her husband, her dogs, cowboys, men in tool belts, cowboys in tool belts and happily ever afters. Please, DO NOT mess with the HEA! Also good books, fab food, great wine and frequent travel – preferably all four together.
She lives on acreage on the outskirts of Brisbane with a gorgeous mountain view but secretly wishes it was the hillsides of Tuscany.