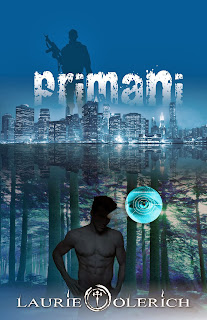 Better close your eyes. She can read your soul. You won’t see it coming.

Mica Thomas doesn’t care about rules. Rules are made to be broken. After the year she’s had, she just wants to feel alive again. But she’s not free to do as she wants. Someone is watching her, setting her course. She’s got a role to play. She’s not ready and the countdown has begun.
Sean O’Cahan is the best Primani there is. His job is to stay in the shadows and steer Mica’s destiny. It should be a routine mission. But she can’t stay out of trouble and he finds himself drawn to her in a way that breaks all the rules. A highly-trained and lethal operative, he’s supposed to protect her, but will his actions change the course of her destiny once again?
The clock is ticking. Time is running out.
She has to be ready.

Awkward doesn’t begin to describe the atmosphere in the foyer. We’d gotten dressed for the mission and were in the foyer getting ready to leave. Sean was adjusting my body armor for the second time when Dec came in. Regardless of what he did or didn’t know, I turned purple with embarrassment. Dec didn’t say anything to me but I saw the questions in his eyes. He looked from me to Sean and back again. He knew something was different but didn’t ask. His eyes settled on my mouth. My lips were puffy and slightly red from Sean’s kisses. He knew! I stared at the floor in embarrassment. Sean ignored him while he adjusted my mic with a professional attitude. When he accidently grazed my neck with his knuckles, I felt the effects of it down to my toes and Dec snorted with amusement.
“What?” I whispered to Sean.
He looked down at me and shook his head with some humor. Dec snorted again just as Killian walked into the room. His expression was colder than I had seen it in years. His disapproval cut like a knife.
He looked from me to Sean and asked, “Why is she glowing? What did you do to her?”
I nearly burst into flames right then and there. Mortified, I turned my back on them and buried my face in my hands. This time, I intentionally sent a plea to him. Please, Killian, don’t be disappointed in us. There’s no more time! Please…don’t cut me out! My emotions were already on edge and I caught a sob before it formed.
And this is what you want from Sean? Killian asked me silently.
No, I want everything from him. But this is a start.
Still playing with fire? His tone was softer now.
Sean put an arm around me and turned me around again.
He whispered to me, “It’ll be okay. Trust me.”
He faced the others and made an unequivocal statement.

Author Bio: Laurie Olerich is the author of the new Primani series. Part urban fantasy, part romance, part paranormal...Three things she can’t live without! Laurie spent most of her life in the Northeastern United States and in Western Europe. She now lives in San Antonio, Texas, with her son and Dalmatian duo, Domino and Rambo.  Desperate to escape the heat, she lives vicariously through Mica and her Primani by setting their adventures in the mountain coolness of New England and the rainy days of London. Before throwing caution to the wind and diving into a writing career, Laurie dedicated 20 years to her country by serving in the United States Air Force. Much of her time was spent around men with guns and cool toys...this explains her obsession with both.