Saturday Sampler - Watch For The Dawn by Sandra McGregor 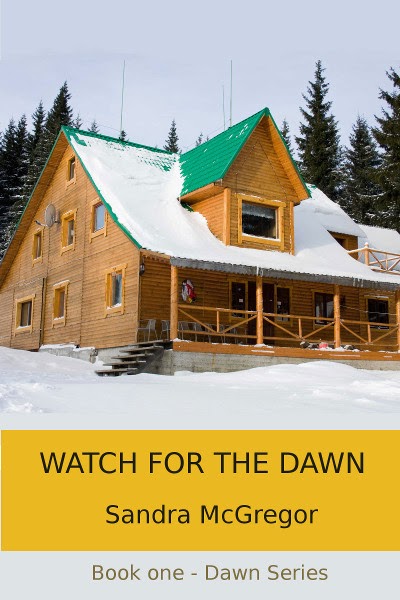 Blurb:
A serial killer is killing co-eds. He watches one cross the campus. When a woman stops her to talk, his pattern changes. He ignores the co-ed, for now, and focuses on the woman. After seeing which classroom she enters, he adds Prof. Kelly Cooper to his list. Det. Steve Mitchell leads the investigation. A mountain cabin is the perfect place to keep the next intended victim safe. Or is it?

Excerpt:
As he neared the driver's side of the car, his boots crunched the already freezing snow. The car door had suffered some damage when the car slammed into the ditch, but he was able to force it open with brute strength.
A quick scan of the interior told him that the female driver was alone.  Thankfully, he could concentrate on her.  "At least she had the sense to wear a seatbelt," he said aloud as he reached in to turn off the engine. The only sound now was the howling wind and an occasional muffled 'woof' coming from his van.
The seatbelt had at least kept her from hitting the windshield, but she would no doubt have a huge bruise across her shoulder and chest from the shoulder strap. Her head was hanging forward, her long blond hair falling toward her face completely hiding it from view.
Even though she appeared to be unconscious, he could see her blue ski parka moving up and down, so at least she was alive.  There wasn’t a way to determine if she had any major injuries, but he’d at least check for fractures.
As his fingers lifted the hair on the left side of her face, tucking it behind her ear, he could see that the seatbelt hadn't kept her forehead far enough from the steering wheel.  An egg-size lump was already visible and turning black and blue.  Apparently the air bag hadn’t deployed.
It was possible that she had a concussion or neck injury, but he would have to take a chance.  He was the only help available.  Without turning her neck, Steve lifted the woman's chin, leaning around her just far enough to lift her eyelids.  He needed to see if her pupils were the same size and equally reactive to the light that was shining from the overhead dome light.  Steve sighed with relief when he saw them contract equally. At least something was going right for her.
“Lady.  Hey, wake up."  Pulling off his glove, he patted her cheek and continued to talk to her until she groaned and started to move.  His deep male voice appeared to be drawing her up toward consciousness.  She turned toward the voice and tried to open her eyes.
"Hey, don't move," he softly, but firmly ordered.
"Wh... Where... am I?"
Her soft voice assaulted his mind. Cultured.  This was a lady.  "You ran your car off the road.  You’re in a ditch.  How do you feel?  Do you hurt anywhere besides your head?"
"Cold.  I'm so cold." Her eyes closed, her shoulders slumping.
He hoped she wasn’t going to faint again.  "Does it hurt to move your neck?"  When her eyes opened again she turned her neck until she was staring into his eyes.
She finally spoke. "No."
Steve felt a definite jolt when he took in the long, blond hair and brilliant blue eyes that seemed to see into his soul.  What a combination.
"Good, then let's get you out of here and into my van.  It's warm there.  It comes complete with a one-hundred pound lap warmer." Her hand reached up to her forehead. “Don’t touch that.  If your head hurts, try concentrating on relaxing your neck and shoulder muscles.  Ever heard of mind over matter?”
“Yes,” she whispered.
“Great.  Do that and I’ll get you some aspirin as soon as possible.”  Steve was still hovering inside the car while snow blew around his body and onto the lady, while she leaned her head back against the headrest and closed her eyes.  He was hopeful that her head was the worst injury, since he could tell it was giving her the most pain.
Without thinking further, he unbuckled her seatbelt and lifted her slight form into his strong arms.  With one arm around her back and one under her knees, he balanced her in his arms.  Her head leaned to the side to rest against his shoulder.  With her warm body tucked close to his chest, he started the short, but treacherous climb out of the ditch.  After fighting the wind for control of the van’s door, he sat her on the backseat, gently easing her down to stretch out on the bench seat.
Once behind the wheel, he took a moment to twist twist around to check on his patient. His lips parted in a smile.  He almost laughed out loud as he watched Rusty stretching as far as possible toward the rear seat so he could sniff the person laying there and yet stay in the front as ordered.
"Rusty," Steve gently admonished.  Rusty turned big innocent eyes toward his master before rearranging himself to more-or-less fit in the passenger seat.  With his chin on his paws and his eyes watching for any sign that his master might change his mind, the dog finally let out a big sigh and closed his eyes.Steve continued to smile as he watched one hundred pounds of golden Lab hang over the edges of the seat, while giving the appearance of being content and comfortable.

Sandra McGregor was challenged by her husband in 2001 to write the book he'd been hearing so much about.  Sandra picked up the gauntlet and since then she has 16 books published.  Sandra has learned that accepting challenges is a lot of work, but the new friends she has made make up for all the hours alone in her office.

In her free time, Sandra loves to travel, read and have fun with her friends or her husband of several decades.  Oh yes, and she can't forget her favorite feline, Jack, who owns the house and a spot in the middle of her desk when she's working.