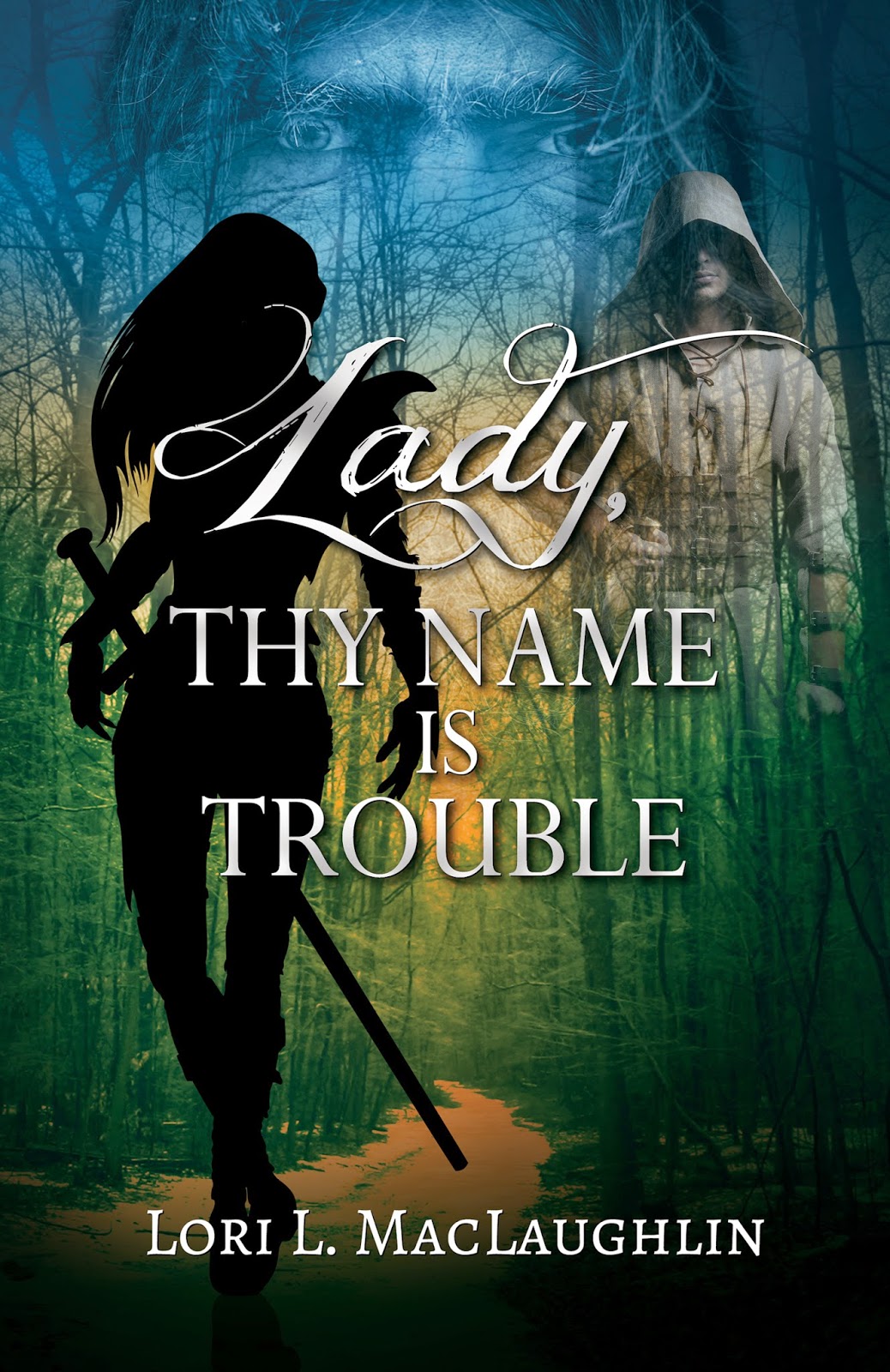 Blurb for Lady, Thy Name Is Trouble by Lori L. MacLaughlin:
Trouble is Tara Triannon’s middle name. As swords for hire, Tara and her sister Laraina thrive on the danger. But a surprise invasion throws them into chaos... and trouble on a whole new level. Pursued by the Butcher, a terrifying assassin more wolf than man, Tara and Laraina must get a prince marked for death and a young, inept sorceress to safety. There’s only one problem – eluding the Butcher has never been done. Aided by a secretive soldier of fortune, they flee the relentless hunter.
Gifted with magic and cursed by nightmares that are all too real, Tara must stop an army led by a madman and fend off an evil Being caught in a centuries-old trap who seeks to control her magic and escape through her dreams – all while keeping one step ahead of the Butcher.

Excerpt:
Tara raced down the moon-silvered streets, following the clash and clang of weapons. Shutters cracked open, then slammed shut as the city dwellers glimpsed what was happening. Up ahead, a snarling knot of soldiers blocked her path. She dodged into a side street. The soldiers chased after her, following a parallel course. Somewhere to her right, near the docking bay, she heard a shout and recognized the voice. She charged forward.

She found Trevillion with his back to the wall, the councilman's soldiers closing in around him. Trevillion fought them off, but was impossibly outnumbered. Tara ran toward him. With another shout, Trevillion leaped into the surrounding troops, sword flashing, and Tara lost sight of him. Just as she reached the mob of soldiers, Trevillion staggered out of the melee and fell, clutching his right side. Tara swept past him, yelling and launching a vicious attack on the nearest soldiers that had them backing away like rats from a flame.
Trevillion dragged himself to his feet. "Tara! What in blazes?"

She sped back to his side. "Are you all right?" Her voice died away. "Oh, gods," she whispered, looking past him. Icy-hot chills raked her flesh. "Natiere."
Head and shoulders above the rest, the Butcher stood, watching her. A satisfied smile softened the ragged scar ruining his face. He was so close. His black eyes locked with hers. In that instant, she sensed his pleasure, his approval. Her mind slipped deeper into his and felt anguish, the pain of a life as tortured as his victims. Surprise crossed Natiere's face.
Trevillion gripped her arm. "Tara!"
She blinked, wrenched her eyes away. She saw the regrouping soldiers coming at them.
"This way!" With his arm clamped to his side, Trevillion ran.
Forcing her limbs to move, Tara followed. Soldiers attacked from all sides. Ducking and slashing, they fought through them and kept running. Tara felt the Butcher coming after her, gaining. She heard a voice like grinding rock barking orders, and the soldiers backed off.
With startling suddenness, Tara and Trevillion burst out into the open. In front of them lay the swollen river. The councilman's troops swarmed out onto the docking bay on either side of them. Tara and Trevillion raced to the river's edge and jumped.

Author Bio:
Lori L. MacLaughlin traces her love of fantasy adventure to Tolkien and Terry Brooks, finding The Lord of the Rings and The Sword of Shannara particularly inspirational. She's been writing stories in her head since she was old enough to run wild through the forests on the farm on which she grew up.
She has been many things over the years – tree climber, dairy farmer, clothing salesperson, kids' shoe fitter, retail manager, medical transcriptionist, journalist, private pilot, traveler, wife and mother, Red Sox and New York Giants fan, muscle car enthusiast and NASCAR fan, and a lover of all things Scottish and Irish.
When she's not writing (or working), she can be found curled up somewhere dreaming up more story ideas, taking long walks in the countryside, or spending time with her kids. She lives with her family in northern Vermont.