The science fiction world--no, the world itself--lost an icon this past Friday. Leonard Nimoy who played Mr. Spock on TV’s “Star Trek” and in eight Star Trek movies passed away at the age of 83. I’ve watched the tributes and read the eulogies. None were as poignant as the ones from his family, especially his grandchildren.

In the 1960’s Gene Roddenberry pitched the concept of “Star Trek” as “wagon train to the stars.” Science fiction back then was so hokey. More like kiddie adventures. But “Star Trek” wasn’t for kids. Different races worked together in harmony. As did different species. Thanks to Leonard Nimoy, the half-Vulcan/half-Terran First Officer came to life. The logical Mr. Spock was the perfect foil to the emotional, over-eager Captain Kirk.

In a CBS interview, Mr. Nimoy spoke of how “Star Trek” changed his life. Up until that point, he’d never had an acting job that lasted longer than two weeks. And he was amazed to find his name on a dressing room door that wasn’t written in chalk. Job security. But like many studio execs who didn’t have their fingers on the pulse of the nation, the Powers That Be cancelled “Star Trek” after the second season. An amazing write-in campaign got the studio to extend the series for one more year. Then it was kaput. Despite the end of the series, Mr. Spock's influence extended far beyond television. He inspired so many scientists and space explorers. He made us believe that differences didn't matter. That we all could live and work together. That friendships knew no boundaries.

Mr. Nimoy talked about going to a matinee and watching Star Wars. He knew the age of science fiction adventure had just ramped up. Forget the first Star Trek movie. Bo-ring. Fortunately, the studio didn’t stop there. The movies that Mr. Nimoy directed and produced are my favorites. He directed Star Trek III: The Search for Spock and Star Trek IV: The Voyage Home and was executive producer for Star Trek VI: The Undiscovered Country. He is also credited with writing The Voyage Home and The Undiscovered Country. What a talented man.

I love that in the two new Star Trek movies J.J. Abrams included Leonard Nimoy as Spock Prime. He brought dignity as well as continuity to the reboot. I’m saddened that he won’t be in the next one. But consider that he was still acting when many actors have long since retired. I’m amazed that with such a debilitating condition like COPD (Chronic Obstructive Pulmonary Disease) he was still acting. Although he quit smoking years ago, the damage had been done to his lungs. He used Mr. Spock’s famous salute in an anti-smoking campaign. “Don’t smoke. Live long and prosper.” My heart goes out to his family and all the people around the world who loved him. 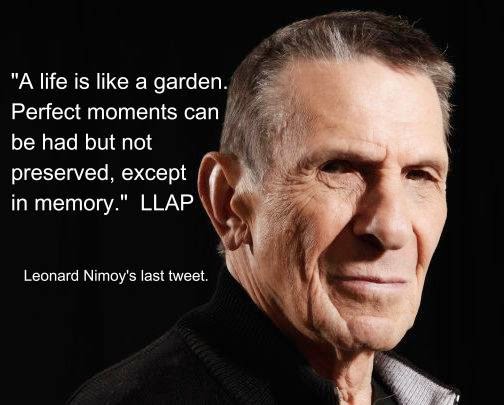 To quote the end of Star Trek II: The Wrath of Khan: "He’s really not dead, as long as we remember him."
Posted by Diane Burton at 5:00:00 AM