I'm happy to introduce you to a fellow Michigander and an author with a new release. Even though we live in the same state, I met A.J. Norris through the Fantasy, Futuristic, and Paranormal RWA online chapter. Let's get this show on the road. 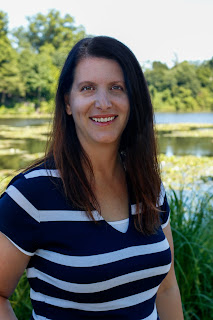 Welcome, A.J. Tell us about yourself.

I’m from Southeastern Michigan and live with my husband, son, and two Yorkie mixes. I write paranormal romance and romantic suspense. In my spare time, I love to go to the movies and watch my son play baseball.

I first realized I wanted to be a writer when a story starting forming in my head and I needed to get it out. That was about five years ago and I’ve been writing ever since. I knew though that I needed help in order to become a better writer, so I joined a couple of critique groups and tried to learn as much as possible through research and just writing my butt off.

I try to write something every day, although that doesn’t always happen. When I’m writing a MS, I will usually put down 1500-2000 words a day. Sometimes more.

I’m a pantser, so I just sit down and start writing. I usually have a main character in mind and put them in a situation and let them tell my how it unfolds. I research as I go along or make a note to look something up later. After I get the first ten thousand or so word down, I loosely outline the ending so I stay on track. I need to have the ending in my sights, otherwise I get lost.

My books tend to be somewhat dark with happy endings. I put my heart into every character and I hope that it shows. I love stories about redemption and second chances.

My latest release is the second book in my paranormal romance series called Her Black Heart. The first book, Her Black Wings is where it all began. I recommend readers start with the first book before reading the second because the sub-plots carryover in the second book. However, each book features a different romantic couple.

Although, my Dark Amulet Series is a paranormal romance, some have said it has horror elements. I also try to use situational humor to offset the darker parts.

A former runaway turned criminal, Amalya is murdered and thrust into a treacherous world full of red-skinned, horned beasts under the control of the Demon Ruler, Abaddon, instead of enjoying peace and serenity like she hoped. But saving a young child from a certain brutal death in the last moments of her life has earned her a chance at salvation.

Elliott the Redeemer wants no part in saving another soul…

After one too many failures at redeeming lost souls, the nail-biting, self-pitying Elliott has had enough of his work and would prefer to live out his eternity on Earth drowning in bourbon. It doesn’t matter that Amalya has grown black feathered wings signifying the good that still dwells within her. He can’t risk failure again.

She has to prevent the now grown child she saved from committing murder or risk returning to Netherworld with Abaddon for good. She can’t do it alone, though. Amalya needs the help of the angel sent to guide her, but their emerging love might not be enough to convince Elliott she’s worth the risk.

Amalya loves her black wings. She knows she’s meant to be an angel—and she will stop at nothing to prove it…

“You can touch them if you want.”
Placing a hand on the cushion at her hip, he leaned down. He ran a palm along one of the top arches of her wings. She closed her eyes and moaned, carried away by the new sensation. His touch felt erotic. What was the deal with that? He seemed to enjoy it as much as she did. Then he stopped, got off the couch, and went to gaze out the sliding glass door.
The angel stared outside. When he didn’t move for five minutes, Amalya became curious to see what he was looking at so intently through the glass. She pulled herself to a sitting position. Straightening out her legs, she placed her bare feet on the putrid yellow carpet. When she took a step toward him, she almost tripped over one of the shoes Aba had given her. She looked around for the other pump. It was missing. Damn; she’d liked them too.
She stood beside him about to take her first glimpse of Earth in ten years. The fact that it had only been a couple of days for them didn’t matter; she was nervous. All she could see was an overcast sky, reminding her of the last moments of her life. She had to step closer to the glass to get a better view. The balcony beyond the door-wall was enclosed with a black wrought iron railing. They were up high, maybe on the top floor of a ten or so story building. She expected to see snow on the ground. Instead, grass covered the courtyard below. What had happened to winter?