Who's For Dinner with Marissa Garner 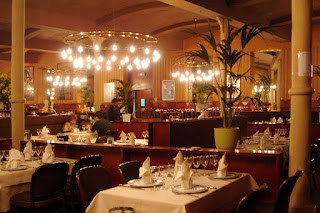 It's Friday and time for fun. Marissa Garner is here to tell us who she would invite to dinner. Take it away, Marissa.


When Diane explained the concept of “Who’s for dinner,” she really made me stop and think. Always a risk, my husband would tell you, because my writer’s imagination can get carried away.

For example, the first dinner guest who came to mind was Eve. Yes, that Eve. I’d ask her, “What the hell were you thinking?” Then the names of dozens of people whom I’d like to grill…er, politely question filled my mind. I’d ask Julius Caesar why they named a salad after him. Did Christopher Columbus have nightmares about falling off the edge of the earth? Kat O’Leary would need to explain what she was doing in the barn the night of the Chicago fire. I’d want to know if Lee Harvey Oswald acted alone. The names multiplied until I had a guest list for a banquet instead of an intimate dinner party. So I started over with a more focused theme and timeframe: modern-day authors who influenced my writing.

Daphne du Maurier definitely deserves a seat at the table because her novel Rebecca is widely considered the origin of the romantic suspense genre. Linda Howard’s books taught me so much about sensuality in the romantic relationships between heroes and heroines that I’d want to learn even more. Iris Johansen could give me new tips on creating beloved continuing characters. I’d pick up a few pointers from Brenda Novak on fast-paced plots and from Allison Brennan on heinous villains. And finally, from my idol Sandra Brown, I’d soak up everything I could but especially new ideas for shocking plot twists. By dessert, my brain would be as full as my belly, and I would revel in the companionship of my talented dinner companions.

Of course, then we’d discuss my latest release, Wanted (FBI Heat #3). If you would like to read it also, you can purchase it here.

Blurb:
For San Diego’s elite FBI agents, risking their lives is standard procedure when it comes to capturing the city’s most dangerous criminals—but falling in love is the greatest risk of all.

Kat MacKenzie knows something is terribly wrong at the Diablo Beach Nuclear Power Plant, but she can’t figure out if it’s computer error, equipment malfunction, or human sabotage. Unfortunately, the only person she can trust with the problem is the man she left at the altar two years ago. If Dillon doesn’t already hate her, he surely will once he discovers why she abandoned him.

The last person he expects to call him is the woman who broke his heart. But FBI Special Agent Dillon O’Malley can’t ignore Kat’s plea for help—not when national security may be at stake. As enemies become clear and catastrophe threatens, can Kat and Dillon put the past behind them to save the day and secure their future? 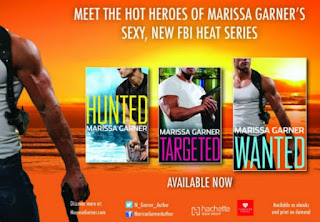 Bio: Marissa Garner is a wife, writer, chocoholic, and animal lover, not necessarily in that order. As a little girl, she cut pictures of people out of her mother’s magazines and turned them into characters in her simple stories. Now she writes edgy romantic thrillers, steamy contemporary romance, and sexy paranormal romantic suspense. Her stories will titillate your mind as well as your libido. She lives in sunny Southern California with her husband, but enjoys traveling from Athens to Anchorage to Acapulco and many locations in between.

Marissa, that's quite the dinner party! I will definitely eavesdrop on that conversation. Daphne DuMaurier is one of my all-time favorite authors. And Linda Howard. Wow. I'd love to chat with all of the lovely ladies you would invite. Best wishes on your new release.
Posted by Diane Burton at 5:00:00 AM