If you noticed last Monday, I didn't post my usual "musings." Hubs and I took a mini-vacation. We started out by driving across the state to the western Detroit suburbs for our good friends' 50th wedding anniversary then to my sister's to celebrate my birthday. From there, we drove north past Bay City (between the Thumb and "fingers) then along the Lake Huron shoreline. For all the years we've lived in Michigan, I can't believe we'd never done that before. We were in no hurry. Our destination was Mackinaw City at the fingertip of the Lower Peninsula. Lovely drive, resort towns similar to those on the Lake Michigan side, fewer trees.

Speaking of trees, we hoped to see the color changes. Not so much. Not sure if there was/will be a peak this year. In fact the best color was outside our motel window in Cadillac on the way home-- two brilliant red maples between two evergreens.

At Mackinaw City, we took the ferry over to Mackinac Island. (Yes, the spellings are correct--Mackinac was the French spelling, while Mackinaw City kept the English spelling; both pronounced the same: Mack-i-naw.) For a special treat, the ferry took us under the Mackinac Bridge, which spans the Upper and Lower Peninsula.. 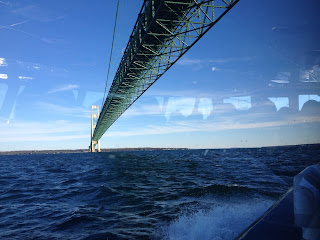 Fudgies, as tourists are called because of all the fudge shops, overwhelm the island in the summer. Even in the fall, full ferries dropped off passengers then turned around to return for more. No cars are allowed on the island. Pedal power (feet, bikes) and carriages are the way to get around. We took a carriage tour. These Belgians pulled our carriage. 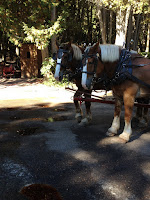 Hubs, who hadn't been to the island in over thirty years, kept remarking about the changes--more buildings, newer paved roads. I'd been there five years ago with my sisters and cousin. Usually oblivious, I noticed some changes, too. The carriage driver gave us history and little tidbits of info along the route, including the fact that the horses are raised and trained by the Amish.

Of course, we had to stop at a fudge shop (mint chocolate and dark chocolate macadamia nut) and some souvenir shops (for the grandkiddies) before heading for the ferry dock and back to Mackinac City. Usually, I like riding on the top deck. Not this time. With the strong wind and water spray, we stayed on the enclosd lower deck rather than get soaked.
The next morning, we headed to Sault Ste. Marie in the Upper Peninsula. That meant crossing the Mackinac Bridge. I love looking at it from a little park. 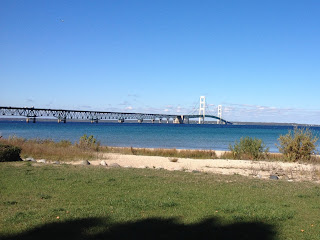 Driving across the bridge is another story. At the center between the two towers, the road bed is 200' above the water. Since heights are a bit of a problem for me, we usually don't drive next to the rail. But then we have to contend with the "hum" from tires on grating. Open grating, through which you can see the water. I can't get across fast enough. The no-passing, 35 mph speed limit (and road construction) slows traffic. Not complaining, mind you. When I was a kid, the bridge wasn't there. The only way to the Upper Peninsula (besides driving around Lake Michigan through Chicago and Wisconsin) was a car ferry. Often the wait for the ferry extended two to three hours. As we rode the ferry, we watched the bridge being built.

Another favorite place for both of us is Sault Ste. Marie, the Soo--the terminus of I-75 (and the "deer's" hip). It's claim to fame is the Soo Locks. Lake Superior connects with Lake Huron via the St. Mary's River, which falls 21 feet. The locks enable ships to travel between the lakes. From the observation platform, you can watch ships enter the locks and the water raise or lower them. You can also take a boat tour and go through the locks yourself. We've done that enough times that just watching from the platform is enough. 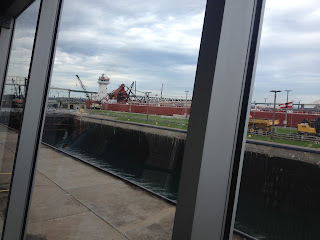 While we were there, two ships went through the locks.In the front of this picture is the empty MacArthur lock, behind is a freighter (distinctive red color with the white pilot house in back) entering the Poe, the longest/largest of the locks that's capable of handing the thousand-footers. As boats approach the locks, an announcement is made alerting visitors. This freighter was carrying iron ore for the steel mills near Chicago. What's the fascination of watching boars going up and down? Hubs used to work at a steel mill near Detroit. His company was the recipient of many loads of iron ore from Minnesota. Without the locks, the cost of transporting the iron by rail would have been much more expensive.

My fascination is a little different. Several years ago, during a visit to the locks, my writer brain went into that "what if" place. What if something happened to the locks? Either an accident or deliberate. That story is still percolating. But each trip Up North (as we Michiganders call it), that story is coming more to the fore. First, I need to finish The Case of the Meddling Mama (Alex O'Hara mystery #3) and one more Outer Rim novel.

I guess it's obvious I love traveling around our state. Besides just enjoying the scenery, I always find ideas for new stories.

*Note:unless otherwise noted, the credit for the pictures belongs to me.