I'm so happy to welcome Patricia Kiyono back to my blog. Patty is a fellow member Mid-Michigan RWA chapter. Since we live fairly close, we often carpool to chapter meetings, so I've heard about this story as it developed. I was excited to read the finished product. (See my review below.)

Here's Patricia to tell you how THREE FRENCH INNS came about. 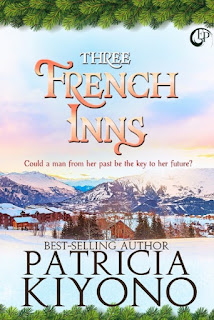 Three French Inns is the third in a series that began several years ago in response to a call-out for holiday stories. The requirements were simple: each story had to feature a duke, and needed to have one scene taking place at the 1812 Christmas ball hosted by Lord and Lady Kringle. The series would be marketed as The Twelve Dukes of Christmas. Being a musician, the series title made me think of the Christmas song and I went to the first verse for my inspiration. Even though I’d never written a regency, I went to work on what eventually became The Partridge and the Peartree. The story featured Phillip Peartree, Duke of Bartlett, and Lady Amelia Partridge.
Even though the book sold well, I wanted a chance to make some changes, and when the contract expired I got my rights back and republished it with changes that were more historically accurate, as well as some new scenes. And since some of my readers requested a sequel, I came up with Two Tutor Doves, the story of the duke’s valet, Robert Townley, and Amelia’s maid, Jeanne Brown. I learned I enjoyed writing about this era, but not necessarily about the endless rules of the ton. So even while I worked on Two Tutor Doves I started planning additional stories, and as soon as that book was complete I began outlining the next book.
Last week, Eskape Press released the third story in the series, Three French Inns. For this story, I focused on Jeanne Brown’s brother Pierre. Two Tutor Doves ended with Jeanne vowing to look for her brother, who’d been missing for several years. He’s been in the army, fighting against Napoleon. I needed a way to get him back in France, and I needed a way to weave three different inns into the story, because I had the title before I had the story!
The first inn was easy. Caroline and her father run Hôtel Bouchard, set in the French Alps. The third inn is the one that Pierre buys for Caroline after her father’s inn burns down. The journey that Pierre and Caroline take to get to that third inn is both dangerous (riding on horseback through the French Alps in winter is not my idea of fun!) and emotional.
I hope you enjoy my historical Christmas series!

Blurb:
Peter Brown joined His Majesty’s Army in the fight against Napoleon, but when he was wounded, a lovely French woman tended him. She was a recent widow, and they were on opposing sides of the war, so they went their separate ways. But he never forgot his “bel ange” — his beautiful angel.

Caroline Bouchard Duval marched with her husband in Napoleon’s army, eager to leave her sleepy village and see the world. But after being widowed, she returned to her childhood home in the French Alps. When a bloody traveler enters her father’s inn, she recognizes him immediately. Could this man give her another chance to fulfill her dreams?

She lives in southwest Michigan with her husband, not far from her children, grandchildren, and great-grandchildren. Current interests, aside from writing, include sewing, crocheting, scrapbooking, and music. A love of travel and an interest in faraway people inspires her to create stories about different cultures.


I love the titles of this series’ play on words from the Christmas carol, “Partridge in a Pear Tree,” almost as much as I love the stories themselves. In this story, the characters are well-drawn and likeable. I admire Caroline’s marching with her husband and soldiers in Napoleon’s army. What an adventure and how disappointing that she had to return home after her husband’s death. Although the story was written to entertain, I loved learning new things. The plot is a bit predictable. After all, it’s a romance, and we readers love our Happy Ever Afters. What wasn’t as predictable was the compromise two people in love made. Isn’t that what love is all about? A delightful holiday story.