Who's For Dinner with Linda NIghtingale

From the time I was a young girl, I’ve had an interest in the Abdication of Edward VIII, later Duke of York, to marry “the woman I love” – an American divorcee Wallis Simpson. Edward Albert Christian George Andrew Patrick David was born June 23, 1894.  His family called him David.  I have his memoirs titled A King’s Story.  It’s a grand look behind the scenes at the British monarchy and the Victorians.  His grandmother was Queen Victoria. His reign lasted 326 days. 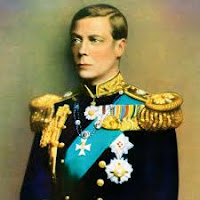 To me, he is a romantic figure.  I’d love to have dinner with a Prince who gave up a throne for a woman.  It is said, though raised as a future King, David was not really suited to his role.  I’d like to find out why, but I’d like to understand what Wallis’ hold over him was.  As you can see by the photo, she was no great beauty (their wedding day). 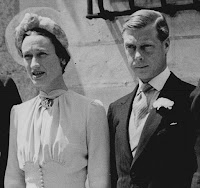 Many of my heroes are aristocracy, and my WIP called Royal Secrets is about a prince who abdicates.  This story was inspired by Edward’s story, though apparently the Duke and Duchess of Windsor, living in retirement in France, were never truly happy.  I’d like to know if it was the Crown or the King wearing it she coveted.

A bit about the person: He played the bagpipes.  He liked spending time on the family yacht. He was very much for the working man. He rode, shot, and hunted as gentlemen did in those days.

I found this tidbit interesting:   In 1917, during the First World War, he began a love affair with Parisian courtesan Marguerite Alibert, who kept a collection of his indiscreet letters after he broke off the affair in 1918 to begin one with an English married woman, Freda Dudley Ward, a textile heiress. In 1923, Alibert was acquitted in a spectacular murder trial after she shot her husband in the London Savoy.  (Wikipedia).

I’d ask Edward (preferably without Wallis):
What was it about Wallis that drew you to her so passionately?
Did you ever really want to be King?
Why did they call you the Playboy Prince?
You gave up a throne—were you happy as the Duke of Windsor with ‘the woman I love’?
Would you be my prince charming? (although he was very short and I’m 5’8”, I’d wear flats).

Morgan D’Arcy: A Vampyre Rhapsody.  Rhapsody is a collection of short stories starring my favorite hero, Morgan. There’s a free read on my website called Vampyre Interlude.  It is a Morgan story, perhaps., his darker side. 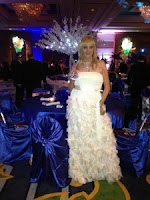 Born in South Carolina, Linda has lived in England, Canada, Miami, Ft. Lauderdale, Atlanta and Houston.  She’s seen a lot of this country from the windshield of a truck pulling a horse trailer, having bred, trained and showed Andalusian horses for many years.