Please welcome my guest Maxine Douglas. Her latest release, Elizabeth, will come out on August 1st. It's available for pre-order. See below. 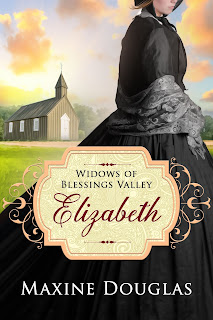 Webster defines grief as “emotional suffering caused by or as if by bereavement” and a widow as a “woman who has lost her husband by death and has not married again.” If these definitions were as simple as they sound.

To the Widows of Blessings Valley, these two words mean so much more. They mean living their lives without the one they gave their hearts and souls to. The one they vowed to love forever. It means crying themselves to sleep at night. It means trying to go on in a new life without knowing how. It means knowing no matter how much they try to heal they never really completely do. No matter how much they think they’ll never love again, they will but differently.

They say time heals all things. That may be true or may not. All I know is the scab on my heart and soul was slowly peeled off and bled again over the months I wrote this book. But I had to write it regardless of my pain, tears, and sorrow.

Elizabeth is the first in the Widows of Blessings Valley series. While it is always a thrill for an author to start a new series, it was with a heavy heart that I was compelled to write this one. I became a widow in April 2018 after a brief battle with cancer took my love from me to be with our Lord. During those agonizing first few months, so many questions flitted into my mind, along with the anger, grief, loneliness, and finally, acceptance that my beloved was really gone from this realm. It was some of those questions that inspired this series. I hope that it will let other widows, and widowers, know that they are not alone with the crazy questions that come to mind. That as they wonder what is or isn’t appropriate—should they remove their ring(s), when, if at all, should they start dating, are they still married or now considered single, what is the proper mourning period in our modern times, when will the anger go away, and the list goes on and on—others are experiencing similar emotions and questions. While I don’t expect this series to be the answer to the grieving of the reader, I do hope that I have somehow eased that feeling of being alone…for you are not. 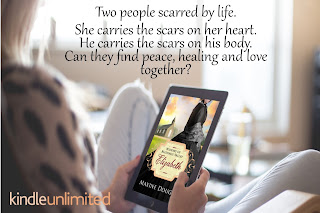 Blurb:
A mining accident has killed several miners in Blessings Valley. Some of the widows are struggling through their grief to answer a widow’s question. With Wilhelmina “Willa” Alexander’s guidance, they just might each learn to live again.

Excerpt:
Rechecking her sewing box for the tenth time, Elizabeth glanced at the mantel clock. Seven o’clock. One more hour before she had to report in at the hotel. What would she do with herself over the next thirty minutes?
Elizabeth paced the floor, feeling like she should be doing something. She was too worked up to sit and wait. She’d been up since dawn getting ready. Making sure that she was presentable. She wanted so badly to make a good impression on Mr. Raines. Her life in Blessings Valley depended on it.
“I can’t wait any longer. I’m going to leave now, Steven, but I’ll be back later today.” Elizabeth spoke to the wedding picture as she did every day. Talking to it was her way of feeling connected with her beloved in her mind, as well as in her heart.
Shawl around her shoulders, sewing box in her hand, Elizabeth walked out her door and down the steps. The sack lunch she’d prepared sat on the table where she’d left it, but it was far from her mind as she passed the church.
The door remained closed this early. The rising morning sun shone brightly on the stained-glass windows, the panes colorful and mesmerizing.
Her heart and soul might be slowly mending but not enough to walk through those doors again. Ignoring the invitation the message in the windows offered, continued on her way to the hotel, a slight heaviness claiming a spot in her heart.
Elizabeth strolled into town, the promise of a new day wrapping around her. It was still a bit too early for most of the businesses to be open. She saw Vera Baldwin duck into the door at Nana’s Laundry. Poor Vera was another of the widows who’d lost her beloved in the same accident that had claimed Steven.
The Baldwins had been in town for less than six months when the explosion happened. Elizabeth realized she was luckier than Vera. Yet like Vera, Elizabeth also found herself employed and alone, fighting for her place in Blessings Valley.
“Stop with these sad thoughts. They won’t do you a bit of good!” she scolded herself, shaking her head. “You are so much braver than you believe, Elizabeth Hamilton.”
US: https://amzn.to/32Dg4gN / UK: https://amzn.to/2Y2o3QU
Goodreads: https://bit.ly/2Z1bBCe / BookBub: https://bit.ly/2XY83o1
Newsletter: https://bit.ly/2YdQsUo
Sample Chapter: https://bit.ly/2OgTffH

Bio:
Maxine Douglas writes in many genres and has found a love for the western historical romance. A Wisconsin native, Maxine resides in Chickasha. While Maxine may miss her family and friends in the north, she loves the mild winters Oklahoma has to offer. She has four grown children, two granddaughters, and a German Shorthair Pointer. And many friends she now considers her OK family.
Maxine’s western along the Chisholm Trail, The Marshal’s Bride, was a 2017 International Digital Award Finalist in the Western Historical-Short category.
Maxine is a current member of Romance Writers of America, Wisconsin Romance Writers of America, Oklahoma Writers Federation, Inc. and its affiliate Oklahoma Romance Writers Guild, Inc.