Amazon's Big Deal: From This Day Forward by Nancy Gideon

I met Nancy Gideon over twenty years ago. In fact, it was at Mid-Michigan RWA's Retreat From Harsh Reality in 1993 and I remember her talking about her newest release FROM THIS DAY FORWARD . Sheesh, does that date us or what? She's been a mentor, a colleague, and--most importantly--a friend. Nancy's here to take us on a trip to the past.


What does a Big Deal have to do with Time Travel?

I want to take you back, way back, back into time.

Okay, probably most of you don’t remember that song about dinosaurs, but I started thinking about it when asked to post on writer buddy Diane Burton’s blog (NOT that WE are dinosaurs!). Besides our Mid-Michigan writers group, we also belong to a fun blog called Paranormal Romantics where we share the way out and woo woo things we both love.  So, what does time travel have to do with my Dana Ransom contemporary romance FROM THIS DAY FORWARD? 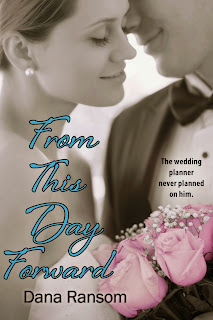 Can two broken hearts make a perfect match?
Widowed on her honeymoon, Robyn Lee pours all her unfulfilled dreams of a happily-ever-after into her wedding planner business, hiding her own heartbreak by making perfect memories for couples beginning the loving future she was denied.  The last thing she needs is the brother of her dream client—whose endorsement will guarantee Robyn’s success—to rock the boat…and her regimented world.

Through the lens of his camera, photojournalist Kyle Travers has witnessed all the ugliness life can offer. Still reeling from the death of his news partner in the field, he sees the frilly job of photographer at his sister’s wedding as an annoyance—until he meets the steely organizer who protects her broken spirit almost as fiercely as he does his own—making him wonder if two fractured halves can make a stronger whole.


Getting FTDF ready for release by Bell Bridge Books took me back . . . way back . . . to the ‘90s.  It was originally written for a 1993 (!) release through Zebra Books’ “Lucky In Love” line.  I’d already had three books come out and had the revisions done and the gorgeous cover for FTDF in hand . . . when the line abruptly closed the month before mine was to ship.  Flash forward twenty years, when a meeting with BelleBooks co-founder Debra Dixon at a conference in New York got us talking about back list books – specifically mine.  And all four Dana Ransom contemporaries found a new home and new readers.

FROM THIS DAY FORWARD was the only book that hadn’t been in print so I got a chance to do all the tweaking I wanted.  Not only did I discover what I didn’t know twenty years ago about passive voice and POV changes, I also got a déjà vu visit to the 1990s where people smoked unapologetically anywhere they felt like it, cameras held film, movies were watched on cassettes and phones were tethered to a cord. Not exactly day of the dinosaurs but still a blast from the past.  One thing that I didn’t change is the one thing that hasn’t changed – the way guilt and regret can sabotage a well-deserved chance for happiness.  My characters' motives and emotions are as true now as they were then, even after a makeover to bring them up to modern technologies. And I still love them!


So back to that Big Deal – Amazon has selected FROM THIS DAY FORWARD for their “Big Deal” May event which lowers its price to $1.99!  You couldn’t get THAT even in 1993!  To tempt you further, here’s a peek at Robyn and Kyle . . .


Excerpt: FROM THIS DAY FORWARD…

“How’s the coffee?” she asked, impatiently. The nonverbal suggestion was Drink up and hit the road. Contrarily, he took a small sip.

“It’s good. Strong and black, just the way I like it. Just the way I need it to get out of bed in the morning.”

He saw her get all edgy at that reference, as if struggling not to imagine him getting out of bed. Or in bed. And he smiled at her, looking smug and lazy and as inviting as rumpled sheets. And because he had her running scared, she blurted out the next sentence without forethought.

“Last night was a mistake.”

His expression didn’t alter as he studied hers. “I’ll say.” Then, just as she began to relax, he added,

“Next time I’ll put the chain lock on.”

A shiver of desperate tension rose up through her. “There won’t be a next time, Kyle.”

He could do one of two things. He could be a gentleman and back off to a cautious distance or he could plunge full steam ahead to rock her off her safe pedestal of grief.

He was a full steam ahead kind of guy.

“I’m not! I find you the most insufferable, rudely arrogant man I’ve ever met!”

“And you love it, don’t you? Come on, Robyn, you do. Because I’m not predictable. Because you can’t write me off in a nice little column in your protocol book. Because I make your heart race and your palms sweat and your mouth water.”

“I think you’re describing symptoms of the flu. That’s what I was suffering from last night.”

He laughed with more confidence than he was feeling. “I don’t think I was making you sick to your stomach. I think you’re just scared to death of what would have happened if Judy hadn’t walked in.”

The moment his head dipped down, hers ducked too, causing his nose to collide with the top of her head. The sudden, swimming pain of it caused him to hesitate, but not to retreat. His grip on her tightened even as her palms were levering against his chest, pushing. But her fingers clung.

“Kyle, don’t.” There was so much anguish in her tone. A gentleman would have relented but she already knew he wasn’t a gentleman.

“Robyn, don’t be afraid,” he said into the soft spill of her hair. “Don’t be ashamed of what you’re feeling.”

“He’s gone, Robyn. You can’t bring him back. You can’t keep hanging on.”

“I don’t want to let go.” But at that moment, she did, releasing all the pent up emotions, all the festering grief. She leaned into the soft, faded fleece of his Pistons sweatshirt and sobbed like a baby with a broken heart. Instantly, his arms enfolded her, all thoughts of passion overwhelmed by those of care. Then it hit him, and hit him hard.

When had he fallen in love with Robyn Lee?


Since spring is also a time of rebirth, I wish you a Happy Spring and Happy Reading!

Nancy Gideon is the award winning author of over 58 romances ranging from historical, regency and series contemporary suspense to dark paranormal, with a couple of horror screenplays tossed into the mix, and is currently testing the “Hybrid author” waters.  She works full time as a legal assistant in Southwestern Michigan, and when not at the keyboard, feeds a Netflix addiction along with all things fur, fin and fowl. She’s also written under the pen names Dana Ransom, Rosalyn West and Lauren Giddings, and is a member of the Mid-Michigan, PAN and FF&P Chapters of RWA.