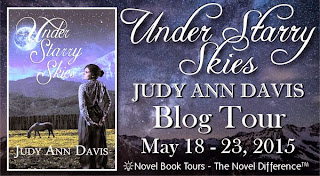 Hired as the town’s school teacher, Maria O’Donnell and her sister Abigail arrive in the Colorado Territory in 1875, only to find the uncle they were to stay with has been murdered.

Rancher Tye Ashmore is content with life until he meets quiet and beautiful Maria. He falls in love at first sight, but her reluctance to jeopardize her teaching position by accepting his marriage proposal only makes him more determined to make her part of his life.

When their lives are threatened by gunshots and a gunnysack of dangerous wildlife, Tye believes he is the target of an unknown enemy. Not until Maria receives written threats urging her to leave does she realize she might be the target instead of the handsome rancher.

With the help of Tye, Abigail, and a wily Indian called Two Bears, Maria works to uncover her uncle’s killer and put aside her fears. But will she discover happiness and true love under Colorado’s starry skies?

Two Bears grinned. “And a sorry hide yours is, Tye Ashmore. You are getting careless. You leave woman with hair the color of mink all alone. You lose horse, rifle, donuts, and water. And you do not take dog with you.”

“If you keep insulting me, Two Bears, I’m going to take my rifle and wrap it around your greasy neck. Why didn’t you bring my horse?”

“Why didn’t you?” Two Bears asked. His mouth was tight and grim. “If I had moved the horse, anyone watching would know to follow me back to you or your woman.”

Tye nodded. “I figured the same. I decided we’d walk down to get it when it gets dark.”

Maria rose and stepped between them. She was weary, and she wanted to get home, take a bath, and soak her skinned arm and injured knee. “Why can’t we just start now?”

“Your woman is not happy.” Two Bears grunted. “An angry squaw can make sunny days seem like rainy ones.”

Maria glared at him.

“Maybe we’re both not happy since you’re eating our food,” Tye countered.

Two Bears thumped his chest and grinned. “I even ate the ones you dropped on the trail. Before any varmints could get to them. Come, I know another path to your horse. By the time we arrive,it will be dark, and you can take your woman and go the rest of the way safely.”

“I am not his woman,” Maria snapped. “I am not a piece of property. Stop saying that!”

Two Bears jumped back, away from her. “If you say so.” He looked at Tye with wide eyes. “Hair like a mink. Temper like a badger.” 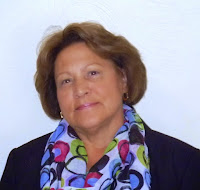 She began her career in writing as a copy and continuity writer for radio and television. Many of her short stories have appeared in various literary and small magazines, and anthologies, and have received numerous awards.

When Judy Ann isn't behind a computer, you can find her looking for anything humorous to make her laugh or swinging a golf club, where the chuckles are few.

She is a member of Pennwriters, Inc. and Romance Writers of America.