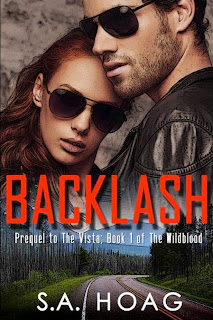 Coming June 2015
Backlash is the prequel novella to The Wildblood series by S. A. Hoag.  Set on a near-future Earth mostly devoid of humans, this reveals some of the harsh realities facing people of The Vista, and how Team Three began.

Vista Security is used to the feral bands of humans wandering the landscape since a brief and devastating war wiped away civilization.  Sixteen years later, they've adapted to dealing with the challenges facing their safe haven.

That is, until a new threat appears, one they never expected and one they have little defense against.  Security throws in everything they can muster; it quickly takes a toll.  Their advantage - an untested team of officers barely more than children themselves; officers with dark secrets and a hidden agenda.

In a free-for-all battle to preserve one of the last sanctuaries of man, Team Three discovers their secrets are their strength and that their future will take them far beyond what they've ever known.

Action, a bit of romance and a good splash of sci-fi set the scene for Backlash, the prequel novella of The Wildblood series.

“Shannon,” her radio crackled static, snapping her out of a restless sleep.  It was Wade on his private channel.

“What's going on?” she wondered, rubbing her eyes.

Her mother was in the kitchen.  Deirdre Allen was five foot three, with pale blond
hair, hazel eyes, and was one of The Vista's actual doctors.  She'd been twenty-nine when civilization ended.  “The hospital just called me in,” she announced.  “Are you on-call?”

“No,” Shan told her.  “Not this time.  I know you don't like carrying, but I think this is serious.  Take a sidearm, Mom, please.”

Deirdre nodded.  “For your peace of mind I will.” She knew how to use it; she'd been forced to in the past and hoped she never would again.  “Whatever it is, be careful.”

“I am, and Wade wouldn't let me get away with anything else.”

“I'll see you in the morning,” Shan said, hearing a car.  “That's Wade.  If he tells me it's practice, I'll let you know.”  She didn't think it was likely, but he'd fooled her before.

The moment she dropped into the passenger seat, she knew it was real.  “Can you tell me now?”  She'd dressed in winter camos with body armor, both Sigs and a boot gun, clips in all her pockets, plus an array of knives.  Her pack held spare ammo, food rations and various bits of survival equipment.

He glanced sideways at her, heading towards Station Two with a purpose.  “We lost a Scout at Wisdom about an hour ago.”

“Lost?” she repeated, not expecting it.

cover by http://www.coveryourdreams.net Cover your Dreams

S. A. Hoag is an author, lapidary artist, very amateur astronomer ("I just look at the stars, I can't name 'em."), and accidental desert-dweller.  Born in the middle of Colorado, more specifically Salida, she has lived in a number of cities in a number of states before crash-landing in the New Mexico desert.  Not Roswell, however.  Science Fiction has always been her first interest in reading and writing; many other genres sneak into the novels and that's alright with her.