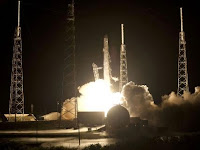 If you’re a regular reader of my blog or can tell from the banner at the top, I’m infatuated with space travel. I grew up in the early days of NASA, glued to the television set with each space launch. That's why I find the possibility of traveling not just within our solar system but beyond fascinating. However, using current technology, it will take almost a year to get to Mars, our nearest neighbor, fifteen years to reach Pluto. Right now, traveling outside our solar system is the stuff of science fiction.

I’m such a newbie to science fiction. I’m still playing catch-up with the works of Bradbury, Dick, Asimov, et al. I did slog my way through Asimov’s Foundation series, but I couldn’t stick with Dune. Saw the movie, though. Science fiction movies spark my imagination much more than books. For a writer, that's probably blasphemy.

One thing most sci-fi stories assume is the ability to travel through space very rapidly. We use terms like faster-than-light speed, warp drive, hyperspace, and jump space or traveling through wormholes and hyperlanes to explain how to get from here to there in the universe. Possible? Not now. Someday, maybe. Where is Zephram Cochrane when you need him? (For those who don’t recognize the name, Cochrane invented warp drive in Star Trek.)

Speaking of Star Trek (you know I couldn’t resist) . . . When the TV series began back in the late 1960’s, the set designers tried to make things as “high tech” as they could imagine. But look at some of those tools in light of today. I find it amusing that they were using toggle switches instead of touch screens and numbers that “flip” instead of being digital. But many of their concepts have found reality in today’s world. Compare their communicators and our cell phones, phasers (weapons) that stun instead of kill and our Tasers, their replicators and our 3D printers, Spock’s tricorder and NASA’s LOCAD, which measures contaminates on the International Space Station. And many more “futuristic” devices that we now take for granted. Here’s the link to an article you may find interesting. http://electronics.howstuffworks.com/10-star-trek-technologies.htm

If devices we thought were too advanced are now possible, why not travel outside our solar system? Relying on our current knowledge of physics, scientists say faster-than-light speed is impossible. What? Impossible? No way.

Here’s the link to the article that sparked this post. http://earthsky.org/space/faster-than-light-travel-are-we-there-yet?utm_source=EarthSky+News&utm_campaign=953cca4e4a-EarthSky_News&utm_medium=email&utm_term=0_c643945d79-953cca4e4a-393789881

Considering the advances in space travel in my lifetime, I think we haven't begun to explore the possibilities. If we can imagine it, why couldn’t travel beyond our solar system come true some day?