Brother Mine by Jolie Mason

Brother Mine by Jolie Mason

Mal Renata was born with the proverbial silver spoon in her mouth, but it never stopped her from becoming the voice of the Braxian people. As an activist fighting off mankind’s inevitable slide into cruelty and prejudice, she wants to stop the Scourge bill from becoming law, but how can she do that, if the bill’s supporters keep dying? Public outcry wants someone to pay, so she intends to give them someone.

Until she tracks down, Adame Sacha, a Braxian freedman and one of the notorious Brother Assassins, she thinks the brotherhood is her problem. Instead, she finds they may be the best allies she could hope for. Together, she and Adame search for those who are eager to profit from the suffering of the Brax, and they track their prey in a world where lives are held cheaply, but death is expensive.

They may be able to elude the dangers of his world for awhile, but they can’t run from the attraction to each other.  No matter what their differences. 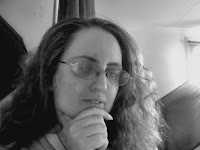 Jolie Mason lives, works and plays on the mighty Mississippi in the infamous New Madrid, Missouri. Coming home again has allowed her time to write and chase the dream she's always harbored in her heart, making people smile with fairytales.

Jolie has been a fangirl to almost every scifi franchise out in her lifetime, and follows every possible scifi romance author out there. Nothing has ever captured her attention like scifi, and she's put all that day dreaming to good use.

She began publishing Home in the Stars in 2015, and has since added a novella series called the 47th Lancers to that number.  Jolie is currently working on two brand new scifi series, including the Brother Assassins.

“Where's your boss?"
The brother before her nodded to the space behind her, and gracefully moved to stand, allowing her room to stand as well, though not as gracefully. "What the hell did you give me?"
"A simple sedative. That is all."
She rubbed the back of her neck. "Yeah, well, it feels like a fifth of whiskey."
"I apologize for your discomfort."
Taken aback, she looked closely at the man. He towered over her and had the lean build of all his kind, but he was dressed as a freedman. Soft, comfortable jacket, trousers and the bands on his shirt that indicate he was not owned or allowed to be owned. There would be two tattoos on each arm underneath as well, to prevent his enslavement. It was a rare thing to meet a Braxian freedman.
"You are a most fortunate man. How long have you been free?"
Surprise jumped to his dark, blinking eyes. "Ten Standard, Suran."
Her lips tightened. "There is no need for sarcasm."
"Pardon?" A slight smile touched his lips.
"Does suran not mean 'most honored one'?"
"It does indeed. It is a term of respect."
She put her hands on her hips. "For royalty that no longer exist. I know sarcasm. I speak it fluently in multiple Languages. You just called me princess in a condescending tone and patronized me, thinking I wouldn't notice."

Get your copy of Brother Mine