Saturday Sampler: Trouble By Any Other Name by Lori MacLaughlin 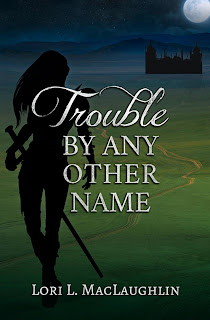 TITLE: Trouble By Any Other Name

Sequel to Lady, Thy Name Is Trouble

Tara Triannon is no stranger to trouble. She's yet to find an enemy her skill with a sword couldn't dispatch. But how can she fight one that attacks through her dreams?

With her nightmares worsening, Tara seeks answers but finds only more questions. Then her sister, Laraina, reveals a stunning secret that forces Tara to go to the one place Tara's sworn never to return to. Her troubles multiply when Jovan Trevillion, the secretive soldier of fortune who stole her heart, is mentally tortured by an ancient Being intent on bending him to its will. And worst of all, the Butcher — the terrifying wolf-like assassin she thought she'd killed — survived their duel and is hunting her again.

Hounded by enemies, Tara sets out on a harrowing quest to discover the true nature of who she is, to come to grips with the new volatility of her magic, and to defeat the evil locked in a centuries-old trap that will stop at nothing to control her magic and escape through her nightmares.

A gust of wind shook the stable, scattering rain across the straw-covered floor. Tara started, shivering in spite of the warmth within. She'd gotten lost in the fire again, drawn toward sleep by the mesmerizing flames. Sensing her weariness, the creature from her dream began to tug at her mind, trying to pull her into the dungeon. Warning chills crept over her skin. She shook her head and sat up straighter.
"You need rest," Jovan said softly. He pulled blankets out of the saddlebags and wrapped one around her shoulders.
"Thanks." Tara drew the blanket closer around her. "I dread it more each time."
"So do I." His hands clenched. "It's infuriating. I can see what's happening in your dream, but I can't help you. I can't do anything. I'm useless to you."
She covered his fists with her hands and raised them to her heart. "No, you're not. It's your strength that sustains me and keeps me going. It's your voice that brings me back." She leaned forward and brushed her lips across his. "I need you." She kissed him again, felt his arms slide around her, drawing her to him. Wrapping her arms around his neck, she settled in his lap, her body pressed close to his. He deepened the kiss, pulling her closer.
"I can keep the dream away for a while," he said.
"Mmmmm, please do," she murmured.
She pulled his shirt off over his head and let her fingers play over the hard muscles of his back. His lips traced a path down her neck.
She arched against him and moaned low in her throat. "That feels so good. We need to do this more often."
He laughed and continued his trail of kisses.
She cupped his face and lifted his eyes to hers, held his gaze for a moment. "Thank you for being here — for staying with me."
He caressed her cheek. "Until my last breath, I will be with you."
Their lips met again in a tender kiss. He leaned back, drawing her with him. His mind touched hers, and she opened to him, let him flow into her like a river of molten fire. Locked in each other's arms, they made love until finally, their energy spent, they fell into an exhausted sleep.

Lori L. MacLaughlin traces her love of fantasy adventure to Tolkien and Terry Brooks, finding The Lord of the Rings and The Sword of Shannara particularly inspirational. She's been writing stories in her head since she was old enough to run wild through the forests on the farm on which she grew up.

When she's not writing (or working), she can be found curled up somewhere dreaming up more story ideas, taking long walks in the countryside, or spending time with her kids. She lives with her family in northern Vermont.

You can find her here: