Saturday Sampler: #free LEAP INTO THE KNIGHT by M.J. Schiller

Blurb ~
Sir Darius Lee is a Knight of the High Order.
But when Darius discovers a stranger in his room in the middle of the night, and the intruder turns out to be a beautiful woman, he begins to question how he is meant to live his life.

Princess Megan of Bethyea is being held captive.
But when two knights help her to escape and bring her back to her home planet, she finds the home she knew no longer exists.

When The Council of Twelve questions Darius about his relationship with Maggie, she tries to flee from The Academy of the High Order to prevent him from losing his knighthood.

Will Darius and Orion find Maggie before she leaves Albion? And if they do, how can they face the decision of The Council? And what about the feelings Orion has developed for the princess? 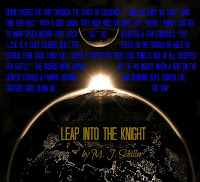 Excerpt ~
Orion couldn’t believe it. He’d been bested by a girl. Confident when he saw her rising, dripping from the pool, he’d hidden behind a wide oak. He didn’t want to frighten her again, so he had jumped out, intending to calmly subdue her. Then the moonlight had spilled over her as she’d risen out of the water, revealing fair skin, wide eyes. Even her disheveled appearance couldn’t disguise her attractiveness. He couldn’t help but notice that the wet fabric she wore clung in all the right places. Her curly hair dripped, made darker by the water, framing her striking face. She had nice cheek bones, a pert nose, and mesmerizing eyes. Distracted by these thoughts, he hadn’t been prepared for what happened next. He expected her to stop, realizing she was caught. But instead he saw a blur of trees and sky and grass. When his master had run past, tossing a teasing comment in his direction, Orion had felt like a complete failure. Winded, he lay there, staring up at the night sky and briefly contemplating the mistakes he had made and how he would avoid making more in the future. There had to be a way to redeem himself in his master’s eyes. 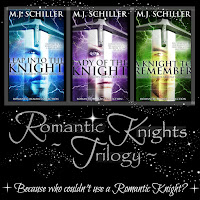 And if you enjoyed LEAP INTO THE KNIGHT, you may want to follow the further adventures of Orion, Darius, and Princess Megan in Book Two-LADY OF THE KNIGHT, and Book Three-A KNIGHT TO REMEMBER! 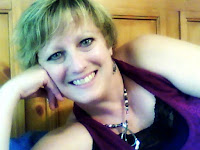 Bio ~
M.J. Schiller is a lunch lady/romance-romantic suspense writer. She enjoys writing novels whose characters include rock stars, desert princes, teachers, futuristic Knights, construction workers, cops, and a wide variety of others. In her mind everybody has a romance. She is the mother of a twenty-year-old and three eighteen-year-olds. That's right, triplets! So having recently taught four children to drive, she likes to escape from life on occasion by pretending to be a rock star at karaoke. However…you won’t be seeing her name on any record labels soon.