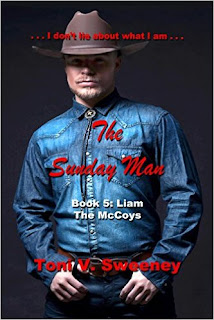 Like his uncle Padraig, Liam McCoyh is the black sheep of the McColy family’s third generation.  Unlike his uncle, he has no intention to change. Being the owner of some questionable businesses suits him just fine.

Unfortunately Liam never fully recovered from the shoot-out saving his cousin’s life, and if he doesn’t change his way of living soon…he may not be living much longer.

When his father demands he return to Ireland, Liam has to again become the gentleman he was raised to be. A devastating rainstorm and a spirited Irish lass will definitely change the way he thinks about a lot of things.

He couldn’t believe it. Liam clutched the letter, his fingers crushing it into a ruined ball as he stared at the ceiling. Everything blurred and he realized his eyes were filled with tears.

“Are you all right?” Siobhan gave him a few moments alone to read his letter before she came in.

He didn’t answer, simply shook his head and looked away, blinking rapidly.

“Liam? What’s happened? What did the note say?” She reached for it.

“That’s none of your business.” He jerked it away, holding it so she couldn’t touch it.

“I think it is.” She didn’t attempt to take the letter again, however. “You’re upset, and if that affects your recovery…”

“Just leave me alone,” he interrupted.  He didn’t tell her he was more angry than hurt, that he, Liam McCoy, who’d always been so careful not to form any emotional  attachments, had finally found someone he could really care for…and she’d tossed him aside. He was too sharp to be captured…and now, the one woman to whom he’d told he might love if she wished it, had jilted him, because of something he couldn’t control, because he was ill. I’m this way because of you. I left your bed and rode into the rain and that’s why you’ve deserted me? 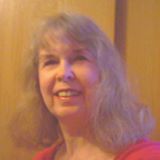 Toni V. Sweeney has lived 30 years in the South, a score in the Middle West, and a decade on the Pacific Coast and now she’s trying for her second 30 on the Great Plains.

Since the publication of her first novel in 1989, Toni divides her time between writing speculative romantic fiction and dark fantasy under her own name and romances under her pseudonym, Icy Snow Blackstone. In 2013, she became publicity manager for Class Act Books (US) and also Double Dragon Publishing (Canada. 2013 - 2016). She is also on the review staff of the New York Journal of Books, is a "Top 10" reviewer for Goodreads, and has been named a Professional Reader by netgalley.com. With the publication of The Sunday Man, She currently has fifty-two novels in print. Two more series are waiting in the wings to begin release this fall.

Learn more about Toni at her webpage at: https://www.facebook.com/tvsweeney  and also at twitter @ToniVSweeney.