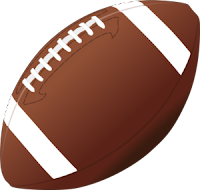 Is college football your Saturday pastime? Pro football on Sundays (Monday and Thursday nights)? Later this afternoon, we’ll go to the park and watch our grandson’s last flag football game. Considering the weather, we’ll probably need our winter jackets. Ironic, in that earlier this season, they cancelled a game because of the heat (90°+).

I’ve never been a football fan. Never been interested enough to learn the rules or plays. Because of Grandson’s enthusiasm, I’m learning. This is his second year where play is stopped when the opponent grabs a “flag” (streamer) from the ball carrier rather than a tackle. Next year, if he continues, the kids will wear pads and helmets and can tackle. Not sure if I’m ready for that.

The kids seem to have fun. Grandson does. The coaches make sure each kid plays each position. (I have to keep erasing “boy” and writing “kid” because a girl plays on one of the teams. Yay, girls!) The coaches encourage the kids, no yelling, no disparaging. The point is to have fun, as well as learn the basics of football. They teach the kids the importance of teamwork. The parents are just as encouraging, cheering all the kids. Isn’t that the way it’s supposed to be?

Unfortunately, it isn’t always. We’ve seen coaches belittle kids. Parents who scream at their kid and/or the coaches. My kids were fortunate to have great coaches. Both Daughter and Son played baseball (T-ball and Little League) and were on swim teams. The enthusiastic parents cheered all the kids. The coaches taught them teamwork. A lifetime skill.

I hear (and I’m sure you have, too) grousing about how we’re raising a bunch of kids who never know how to fail. Everyone gets a trophy/ribbon/prize, no real winners. While that’s true, when kids are just learning a new sport, what’s important? Winning or having fun and learning the game? For the flag football teams, there is no scorekeeping. (You can bet, though, that the kids keep score in their head.) As they get older and, hopefully, mature, the game will change and scores will be kept. There will be winners and losers. I hope the coaches will teach them how to be gracious whether they win or lose. That they will learn from their mistakes.

I also hope those kids, especially Grandson, will continue to have fun.