I'm happy to have fellow Michigander Gina Conkle here today. Even though she wasn't born here, we've adopted her. We met through the Mid-Michigan RWA chapter.

Welcome, Gina. Tell us about yourself. 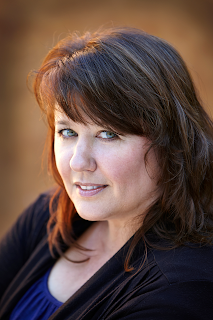 Hi! Thanks for hosting me, Diane. I’m Gina Conkle, writer of Viking and Georgian romance. I’m also wife to Brian and mom to Clay (in college) and Chad (in high school). I grew up in southern California, but we made a big move to Michigan in 2014. We love it here! When I’m not writing, I do a little flower gardening and when I have time for it, I like to explore cooking foods from around the world and from different eras.

There was a crystal-clear moment in 5th grade. I was sitting at my desk at school. I remember the clothes I was wearing and thinking about what I’d read (Gone With the Wind) and a story I’d written for a creative writing assignment (The Girl Who Stopped World War III).

They love it. My husband is fully supportive of my writing and my sons think it’s pretty cool that mom writes books. They also think cool how I know minutiae about Vikings and Viking history. My son Chad will tease me with, “Hey, Mom, didn’t Agnar Legbone invent that?” when we talk history.

I also read non-Mom-ish things. I get several archaeology newsletters, and I get books and periodicals from around the world about history of warfare, ancient history, and all things medieval. When we first moved to Michigan, my Medieval Warfare magazine was forwarded to my husband’s company, and the latest issue was on his desk. An employee read an article title aloud, “The Mace: Simple but Effective.” The employee thought the magazine was for a man!

Or he could've thought the mace was your husband's style of management. 😊
What do you enjoy most about writing?

I love getting lost in the story worlds. The other surprise comes from the revelations about life. I’m hungry to keep learning…as much about knowledge and the world around us as learning things that make me a wiser woman.

Excellent advice. How do you balance a life outside of writing with deadlines and writing muses?

Ha! I don’t! My family knows to leave me alone when I’m locked away. I’m not very good at balance. I tend to be all or nothing. In 2006, I decided to set aside my writing and focus on my boys. I’d started writing late 2002/early 2003. Any writing was done after my boys had gone to bed. But, I noticed writing and RWA activities starting to take over my life. It wasn’t until early 2012 that I felt like “Okay, let’s focus on writing.” My husband points out my tendency to throw myself into projects…sometimes at the exclusion of everything else.

I'm the same way, Gina. All or nothing. What are some jobs you've done that would end up in a book?

I worked in biotech, specifically in Life Sciences. My biotech experience came in handy when I wrote Meet the Earl at Midnight. The hero, Lord Edward, was a man of science studying the healing properties of plants.
Where do you get your information or ideas for your books?

I read a lot of non-fiction history books. What might seem dry to others is heaven to me (especially female historians writing about Viking women and Viking history). Worlds open up to me and a story plays out like a mind movie.

That is so cool, Gina. Tell us about your latest release.

My latest release, Meet a Rogue at Midnight (a novella) is the 4th installment in the Midnight Meetings series. It stays squarely in Georgian romance, no crossing over into other genres.

This story is a childhood friends-to-lovers romance, which was a first for me to write. The hero, Jonas, first appears in Meet the Earl at Midnight as man of business to Lord Edward. I didn’t originally have a story for him, but my then editor, Leah Hultenschmidt, asked for Jonas to be the hero in book 2 in the series. My agent pushed for book 2 in the Midnight Meetings series to be Cyrus and Claire’s story (The Lady Meets Her Match). Jonas got shuffled to the backburner until this year.

Fans have told me they like that Jonas is a commoner. He’s the strong silent type, and I’ve also had lots of excited, fan feedback on his first kiss in the book!

Tell us more about Meet a Rogue at Midnight. I love the cover. 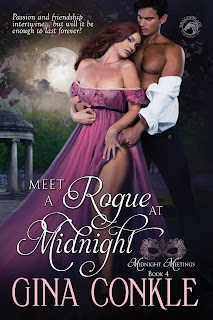 Jonas Bacon Braithwaite wants to make peace with his grandfather before departing England. Once Nottinghamshire’s favorite trouble-maker, he’s since become an upstanding man of honor. But, the lushly curved thief hiding in his bedchamber makes him think twice about one last conquest.

Livvy Halsey bristles at life’s rules. Always has. Sneaking into the Braithwaite house to reclaim a treasured family heirloom is one way she upends the conventional life that awaits her. Duty demands she marry. But what harm is there in having a little fun with her childhood friend before the Twelfth Night ends?

That was a great first meeting, Gina. One last question before you go. Where can readers find you?