Spotlight on EMBRACE THE ROMANCE: PETS IN SPACE 2 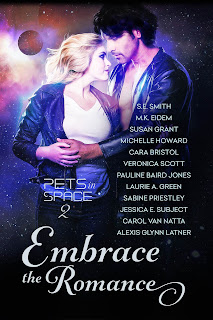 As I said in yesterday's post, I'm excited to share a fun anthology by some friends of mine. They have been sharing excerpts on their blogs, which has only increased my desire to read the book. The original Pets in Space was so much fun to read, I pre-ordered my copy of Pets 2 as soon as it was ready. My copy downloaded last night, and I can't wait to read it. Here's my friend Cara Bristol to tell you more about it. 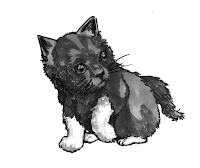 Embrace the Romance: Pets in Space 2 description
By Cara Bristol

The pets are back! Embrace the Romance: Pets in Space 2, featuring twelve of today’s leading Science Fiction Romance authors brings you a dozen original stories written just for you! Join in the fun, from the Dragon Lords of Valdier to a trip aboard award-winning author, Veronica Scott’s Nebula Zephyr to journeying back to Luda where Grim is King, for stories that will take you out of this world! Join New York Times, USA TODAY, and Award-winning authors S.E. Smith, M.K. Eidem, Susan Grant, Michelle Howard, Cara Bristol, Veronica Scott, Pauline Baird Jones, Laurie A. Green, Sabine Priestley, Jessica E. Subject, Carol Van Natta, and Alexis Glynn Latner as they share stories and help out Hero-Dogs.org, a charity that supports our veterans!

10% of the first month’s profits go to Hero-Dogs.org. Hero Dogs raises and trains service dogs and places them free of charge with US Veterans to improve quality of life and restore independence.

Buy link for all stores: https://books2read.com/u/3L9aYM

Hostage and sole survivor Solia waits for death at the hands of vicious predatory aliens when Cy-Ops agent Guy Roarke disobeys orders and charges in. A former medic, he initiates emergency medical procedures before rushing her to Cybermed.

Guy is taken with Solia, but the guilt of a past mistake won’t allow him to plan for a future with the delicate, brave beauty. Life is so uncertain, he can’t even keep Mittzi, the kitten his niece gave him. What he can do is see to it Solia gets the help she needs for a full recovery. But when best intentions place her in greater danger, it’s up to a little kitten to make everything all right again.

Something kept poking her. Solia rose to consciousness but buried her face in her wing and squeezed her eyelids even tighter. She didn’t want to see what existed in the light. Monsters were real, and they didn’t just creep in the night. Don’t look. Stay here. Here, wherever that was, with her eyes closed, was warm, pain-free, safe.

Safe from what? What was she forgetting?

Pat. Pat. Something pawed at her feathers. Then a rumble. Pat. Pat. Poke. Something sharp, like a claw scraped across her face.

Cage. Death. Her lids sprang open. Two green Ka-Tȇ eyes stared into hers. The creature yawned, revealing a mouthful of small, sharp teeth, and then struck out with its paw.
Solia shrieked. The creature somersaulted and disappeared. Dragging her broken, torn wing, Solia stumbled for the door and plowed into a massive chest.

“What’s happened? What’s wrong?” A man gripped her shoulders. Though he barricaded the way, his presence exuded safety, calmed her panic. More memories flashed. Racing through the jungle. This man carrying her to a pod. Bodies hitting the window, scratching, clawing, trying to crack it open. The man—Guy— had rescued her from Katnia. The floor hummed beneath her feet. She was on a ship now.

“What? Where?” Disbelief knit his brows.

Solia gulped air and pointed. “Under the berth. It’s little, but I woke up, and it was on me, scratching my face. It had green eyes. Claws.” She patted her cheeks. There didn’t seem to be any injury.

“Mittzi.” Guy shook his head. He got down on all fours to peer under the bunk.

He reached under the berth and pulled out a ball of gray fur with white feet. Maybe Ka-Tȇ were born furry but lost their hair as they matured? The creature spoke, emitting an odd little meow noise. Neither language training nor the implant provided a translation. It clung to Guy, showing no sign of savagery, but maybe viciousness developed with time, too.