New Release: Leave Nothing But Footprints by Patsy Collins

I love the title of this new release. It's a premise of Girl Scout camping. (I blogged about my family's involvement in Girl Scouts last Monday.) That made me ask Patsy to tell us how her story came about. 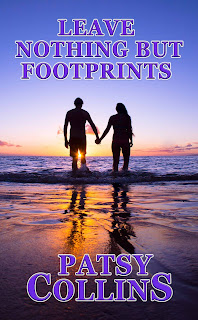 Diane asked me to explain how I came to write Leave Nothing But Footprints. Thank you so much for the opportunity, Diane!

I've written four romances now. The first (Escape to the Country) was published after I won a novel writing competition. Unfortunately the publishing company then closed down (I'm fairly sure that wasn't my fault!) I subbed my next one (A Year and a Day) to Mills and Boon. They were very complimentary, but didn't take it as they felt the secondary characters had too large a role. It was a fair point – the story is as much about the friendship between Stella and Daphne as it is about Stella's love life. I self published that one and a new edition of Escape to the Country. 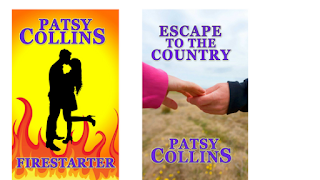 In my next novel (Firestarter) the secondary characters again play an important role. Alice is very close to her sister Kate, so naturally confides in her and they spend a lot of time together. Personally I'm happy to read romances where the lead characters have close relationships with family and friends and by then had decided to stick with self publishing, so didn't feel obliged to confirm closely to a publisher's requirements. Even so, I decided that for my next one I'd ensure other people didn't take too much attention away from my romantic leads – perhaps just to prove I could.

Much of my writing is done in a campervan as I accompany my husband to various locations (he's a professional maritime photographer). I realised that if I could get my main characters into a campervan there wouldn't be room for anyone else. Naturally I needed a reason for them to be there, so I engineered an extended photographic assignment. They do say 'write what you know' but I promise the book isn't autobiographical. 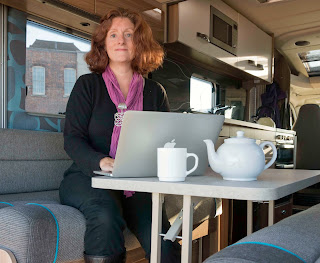 As with my other books, I wrote most of Leave Nothing But Footprints on location, but with this one I took it to the next level. Of course I climbed the hills, walked the beaches and followed the paths where Jess and Eliot took their photos. Obviously I carried out research (my husband made a brilliant consulting expert for the photography stuff). Naturally I tried out the food and drink they enjoyed (any excuse) but for this one I worked on my laptop at precisely the spot Jess processes her photos and even slept in her bed. It's a good thing I like her as there was no escape!

Jessica Borlase always gets what she wants. From cocktails in the exact shade of her manicure, holiday on Capri with friends, to a spacious apartment, her father's money makes it possible. She enjoys the luxurious lifestyle and is grateful for his support, but frustrated to always be treated as Daddy's pampered little girl. She tries to break free, by leaving Borlase Enterprises and studying photography.

Now what Jess wants is the utterly gorgeous Eliot Beatty; a world famous photographer who often uses his talents to benefit conservation projects. Her father attempts to bribe Eliot into taking Jess on an assignment in order to teach her the skills she'll need to develop a career. Although annoyed at the interference, she's delighted to discover this means two weeks with Eliot in the beautiful countryside of South Wales and close confines of a campervan. Trouble is, the man can't be bought.

Jess eventually manages to persuade Eliot to take her. She believes she can earn his respect and that she's ready for the hard work, long hours and living conditions far short of those she's used to. She's wrong on all counts. Can Jess learn to cope with the realities of the trip, and is Eliot really worth the effort?

In this scene, Jess is seeing Eliot's campervan for the first time.

Jess looked in from outside and smiled at the pale wood effect floor and trim, the neat storage solutions and the turquoise cushions. It was obvious why Eliot had been surprised by her rooms when he'd first gone there. The van was very much a miniature version of her apartment. It was much nicer than she'd expected. Much smaller too.
"The seats at the front swivel round to face the table when I want them to. This table can be fixed to the side of the van outside if we want to eat al fresco."
"I'm not a big fan of eating standing up," she said without thinking. Why pick holes when he was telling her the advantages of what seemed to be his pride and joy?
"Me neither, but I've packed folding chairs. This is the kitchen." He indicated two gas burners and a dinky sink. "Fridge." He opened the door, showing it was crammed full of food. "Bathroom." He slid open an internal door.
Jess stepped up into the van to take a closer look.
"The toilet flushes, there's a sink and shower."
"Pretty good."
"I'll have to show you how to use them, but it's not difficult. And this is obviously the bedroom."
At the rear of the van was a double bed complete with duvet and pillows, all in the same turquoise as her own bedlinen. She realised the bed was raised up to create the storage space which now contained her clothes and camera equipment.
"A double bed?"
"Yes, proper mattress too. Oh, don't worry, the bench seat and table at the front convert into a single. I'll be having the double. Where you sleep is up to you."
She wanted to give him a disapproving look, but wasn't quite sure she could manage it. 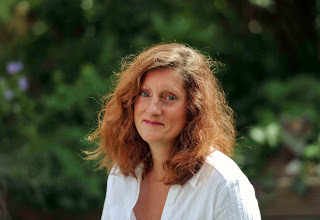 Bio
Patsy Collins will write anywhere she can reach in her campervan. She's the author of five novels; four contemporary romances and one coming of age story with a difference. Hundreds of her short stories have been published in magazines in the UK, Australia, Sweden, Ireland and South Africa. She's also co-author of From Story Idea to Reader – an accessible guide to writing fiction.

Patsy blogs about free entry writing competitions and runs the womagwriter blog which is handy for magazine guidelines. You can also find Patsy on Twitter https://twitter.com/PatsyCollins  and Facebook https://www.facebook.com/PatsyCollins.writer

Email ThisBlogThis!Share to TwitterShare to FacebookShare to Pinterest
Labels: Escape to the Country, Firestarter, Leave Nothing But Footprints, Patsy Collins